Musings: Al Capone Does My Shirts 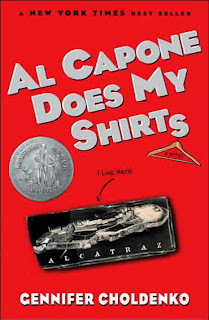 I am not sure when I first heard about Gennifer Choldenko's middle grade book Al Capone Does My Shirts.  I don't read much middle grade fiction, but the premise of this book really caught my attention.  Moose Flanagan is a 12-year-old boy growing up in the midst of the Great Depression.  His family has just moved to Alcatraz for his father's new job as electrician and prison guard.  They hope that the new job will give the family enough money to afford a new school for Moose's older sister, Natalie, who suffers from severe autism.  Maybe if Natalie gets into that school, Moose's mom will return to normal, too.

Al Capone Does My Shirts is a slim volume that deals with a lot of heavy issues.  I feel like when I was in middle school, books for young readers were written on one topic.  For instance, there would be a book about Moose's family moving to Alcatraz.  Or a different book about Moose's families money issues.  Or another about Moose dealing with his mom's depression.  And another about his sister.  But they wouldn't all be in a book together.  It's as though until recently, no one thought that kids could handle more than one difficult situation at once.  But now we all understand that kids' lives are complex, and books have evolved to acknowledge that complexity.  This is an excellent example of that evolution.

What stands out most in this novel is Moose's relationship with his sister.  He loves and cares for her, even as he resents the way that she dominates so much of his life.  His mother rarely pays him any attention because she is so focused on Natalie, and his dad never stands up to his mom.  Moose has to play babysitter to his older sister most afternoons instead of playing baseball with boys his own age.  I really enjoyed the way that Choldenko portrayed this sibling relationship.  All relationships between brothers and sisters are complicated, with a lot of affection balanced out by resentment and grudges.  Moose's love for his sister is obvious; he knows her better than anyone else does, and she trusts him.  But he also wishes that he had a normal sister who could take care of herself.

Natalie was written very well, too.  I do not know much at all about autism except the basics and what I learned from The Curious Case of the Dog in the Night-Time and Born on a Blue Day.  Choldenko based Natalie on her own sister, a woman who suffers from severe autism.  So Natalie is written in a realistic, sympathetic way, and the effects of severe autism on a family are made clear in the book.

I also enjoyed the way life on Alcatraz was weaved into this story.  Choldenko's afterword shows just how much research unto the Alcatraz community she did before writing this book.  While Al Capone doesn't make an appearance here, his presence is felt by everyone on the island, and the book's ending is pitch-perfect.

What kept this book from being a full-blown success for me was that there were just too many characters, and they all blended into each other.  I would have preferred it if Choldenko hadn't filled so few pages with so many people, but I hear there is a sequel to this book out now called Al Capone Shines My Shoes, so maybe those secondary characters get more air time in that one.  I won't be rushing out to read the sequel any time soon, but that could be because this book felt a little too young for me.  *Understandably, as I am significantly older than the target audience.)  Even so, I appreciated the way that Choldenko approached so many important topics and really brought light to a condition that many children are dealing with these days in some manner.  This would be a great book for a school library collection.
Musings by Aarti at 7:30 AM