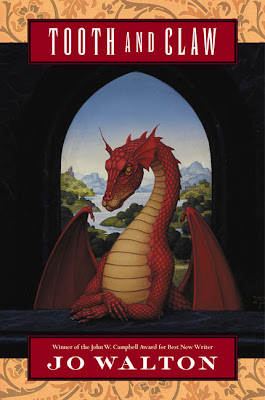 I recently came to the sad conclusion that I have no love for Victorian writers.  They are moralistic, long-winded, class-conscious and often sexist.

But after reading Tooth & Claw, by Jo Walton, I realize that my problem with Victorian novels is that they are not written from the point of view of dragons.  As a rule of thumb, dragons make everything better, but they infinitely improve a Victorian novel.

I first encountered Jo Walton's supreme awesomeness in Among Others, where she casually referenced about 500 science fiction novels to help tell her coming-of-age story of a girl from Wales.  Just as Walton played with the tropes of magical realism in that book, here she plays with the traditional Regency and Victorian comedy of manners novels of old.  But she doesn't do this in a Pride & Prejudice and Zombies or Abraham Lincoln:  Vampire Hunter way.  Walton doesn't infuse the Victorian novel by adding fantasy to an already existing novel.  Rather, she refreshes it in a way that yes, involves dragons (for which we are all grateful), but also brings attention to the real issues and difficulties faced by individuals of the time by alluding to them through the fantastical world she's created.

Tooth & Claw is about the Agornin family.  The family patriarch passes away early in the story, and this changes the lives of all his children.  His wealthy and powerful son-in-law takes a larger share of the inheritance than he needs or deserves, which bothers all the Agornin siblings.  His elder son faces a crisis of faith that he cannot share with anyone else in his family for fear of being thrown out of the Church.  His younger son takes his brother-in-law to court to sue for his rightful inheritance.  And his two unmarried daughters, without a great dowry between them, must be separated and depend on the kindness and generosity of their siblings to keep them. 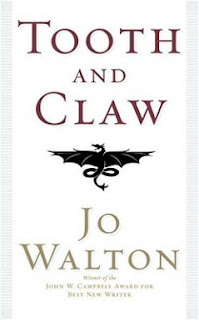 Walton says in the preface to this book that "...a number of the core axioms of the Victorian novel are just wrong.  People aren't like that.  Women, especially, aren't like that.  This novel is the result of wondering what a world would be like if they were, if the axioms of the sentimental Victorian novel were inescapable laws of biology."  How does she do that?  Well, maiden dragons in this novel have golden scales; once they have been in close, unchaperoned proximity with a male dragon, they turn pink.  This happens whether the advances were welcome or not, and this biological phenomenon has great repercussions for two of the women in this novel.  Additionally, the wealthier dragons are bigger, faster, and stronger than the rest.  They can not only defeat smaller dragons in battle, but can eat weakling dragons that live on their lands.  This results in a social hierarchy that closely resembles that of 19th century Britain and results in keeping the lower orders firmly down.

I loved a lot about this book, but I was mostly fascinated by Walton's endeavors to make Victorian mores biological facts.  It is so striking to see the effects of a woman who really does wear a scarlet letter for everyone else to see, and makes it easier for modern readers to understand just how unalterable life was for "fallen" women of the era.  I also enjoyed the tantalizing glimpses into the history, political structure, religion and social hierarchy of the dragon world.  But those also frustrated me.  There was much I did not quite understand about this world, and I wanted more.  I hope Walton decides to make this a series of books an not a stand-alone.

As for the characters, I enjoyed them, too, but more as symbols than as characters.  There are a lot of dragons populating this book, and as it's only about 250 pages long, that means none of them gets much time in the spotlight.  While the two sisters, Selendra and Haner, get most of the attention, Walton also shares the thoughts and motivations of other protagonists in the book.  This results in so many nuances over a wide spectrum, ranging from poor tenant farmer to wealthy dowager, from bound servant to fallen woman.  While I am glad to have had such a diverse spectrum of characters, I wish that I could have gotten to know all of them and their stories better than I did.  There is so much in this novel that could have been explored in depth and detail.

But there are not many books that earn the complaint of, "I wish it had been longer."  Tooth & Claw was a fascinating look at Victorian culture through a creative and unexpected lens.  I thoroughly enjoyed reading it, and I look forward to reading much more from Walton in the future.
Musings by Aarti at 7:30 AM