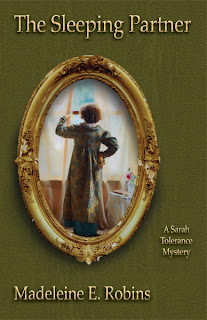 The Sleeping Partner is the third book in Madeleine Robins' Sarah Tolerance mystery series (see my reviews of the first book, Point of Honour, and the second book, Petty Treason) set in an alternate Regency England in which Queen Charlotte rules as Regent (currently).  I am a huge fan of this series because I love the way Robins has played so subtly with the Regency to bring attention to gender roles and sexual power in this historical period.  I also love the series because Sarah Tolerance is awesome.  She is in the perfect position to straddle all levels of society, from the cream of the Ton that comprise her clients all the way to the young boys that work menial jobs sweeping the streets.

In this outing, Sarah Tolerance is hired by a lady whose sister Evadne has gone missing.  She's terrified for her sister's well-being though she's also quite frank about the fact that, now that her sister has been missing for several days, her future even if found safe is pretty dire.  Sarah, being a Fallen Woman herself, immediately feels for the missing girl and sets out to find her, embroiling herself deep in a sordid family history that involves war profiteering, re-encountering her own lost family and meeting both Mary Wollstonecraft and Mary Shelley along the way (hey, it's an alternate history, so it's possible!).  And all the while, she's struggling with figuring out her complicated feelings for her good friend Sir Walter Mandiff and trying to determine if her brothel-keeper Aunt Thea is going insane or just being odd.  Sarah's a busy girl, but she's up to the challenge!

I read this book with my friend Sudha, whom I introduced to the series when I first started reading it.  Sudha is the one who alerted me to the fact that a new book was out, and we were both excited to drop everything we were reading at the time to get cracking on this one.  Below are our thoughts on the book.


Sudha: I was in the process of cleaning out some of my bookshelves last month when I came across my copy of A Point of Honour. I just quit what I was doing and sat on the floor, re reading all about Miss Sarah Tolerance. Of course I moved right on to Petty Treason, and upon finishing that, I decided to put my mad Google skills to work to see if Ms. Robins found a publishing home for the rest of the Sarah Tolerance series. I was so happy to see that The Sleeping Partner was coming out so soon! It was reading fate!


Aarti:  I really liked this one, too.  Granted, it’s been at least two years since I read the previous outings, but this was a much grittier and emotionally charged book than I recall the other two being.  We learned so much more about Sarah, met some of her family, dealt with a possible mental illness and confronted a seriously disturbing case.  And through it all, Sarah Tolerance continued to be awesome.

It was also great to get Mary Wollstonecraft and Mary Shelley in this book.  I loved those scenes, and how the women didn’t think Sarah was a bad influence or a horrible Fallen woman at all.  They were so welcoming and interested in her story.  I think she needs to hear that once in a while, and who better to tell her than Mary Wollstonecraft?


Sudha:  I very much enjoyed this book. The Sleeping Partner has the perfect cocktail of strong heroine, shadowy evildoers, and real life historical references to keep the plot going. War profiteering at the expense of the men on the front has been happening forever. I found it both depressing and oddly reassuring that people were just as greedy and ruthless back then as they are now. How nice!


Aarti:  And then there was the whole situation with Sarah’s aunt Thea and her slowly slipping mind as a result of the stroke.  I wonder where that will go in future.  I really like getting a glimpse (however fleeting) into brothel life.  I feel like Robins is very straight-forward and honest in her portrayal of the period, showing all the grittiness and all the glamor, instead of just one or the other, and I appreciate that.  It really makes London so much more real and the city itself is such a strong character.  It was very Sherlock Holmes-esque the way Sarah used the street kids as her spies, too, wasn’t it?

Sudha:  Whenever I read a novel that takes place in the Regency/Napoleonic wars era, I cannot help but compare it to the works of Georgette Heyer. For this book, I kept comparing the family relations in Heyer novels to the family relations in The Sleeping Partner, especially the relationship between Sarah and her brother, and Evadne and her father. The protagonist Heyer families would certainly try to hush up any shadow of a scandal, but they would also draw around their affected family member and protect that person at all costs. In both the cases of Sarah and Evadne, the family thought of them as disposable rather than as an essential part of the family. I found that wholesale rejection of a family member almost ridiculous. I then had to remind myself that Sarah Tolerance lives in a fictional world and Ms. Robins can do what she wants in it, but this plot point still strikes me as a bit hollow.

Aarti:  That's a really good point.  On a related note, I didn’t like all the jabs that Sarah made against feminists or books by feminists.  I mean, seriously?!  If women had more rights, then her whole situation would not even be a situation.  But she seems to totally believe in this system that makes her anathema to society, to the point that her own brother won’t acknowledge their relationship and she was unceremoniously disposed of by her famly.  And somehow, Sarah thinks that women who read books on women's rights and believe in their content are somehow really boring and stiff and dull when they are the ones that she would probably get along with very well.


Sudha:  I also was a little weirded out by Sarah’s condescending attitude towards the feminist ideas of the day, and her clear acceptance of her status of “Fallen.”  Even though she is such a firebrand, she does not seem to have much empathy for her fellow Fallen women who are sex workers.  Never mind that many of them are happy in their profession and take pride in it (like her friend Maryann Touchwell); Sarah seems to paint all of the prostitutes with the same tarred brush.  She has clearly internalized the culture of oppression in her world and I was quite disconcerted by it.  I wonder if this attitude of hers will change as the series progresses.

Aarti:  I think it will be interesting if the character of Evadne/Evie stays on in the series and evolves as well.  I think she'd be a great foil to Sarah and really give Sarah reason to rethink her less forgiving opinions.  I hope she plays a part in the series going forward!

Sudha:  My favorite part of this book was Evadne. So often, books portray rape survivors as lost, unrecoverable, and facing a hopeless future. Evadne is none of those things. She is traumatized and full of rage but the reader still gets the sense that she will move on from this horrible time of her life. She may not be married and have the traditional life for a woman of that time, but she will live on and survive.

Overall, a really great addition to a series that Sudha and I both enjoy tremendously.  So looking forward to more Sarah Tolerance adventures, and hoping for continued evolution of the fascinating and wonderful cast of characters therein.  I wish the series was around when I was a teenager- I'd have loved to have such a strong and confident woman as Sarah Tolerance to look up to.

Note:  I received this book for free to review.  I did not receive the first two books in the series for review, and Sudha paid for her copy of the book.
Musings by Aarti at 9:42 AM