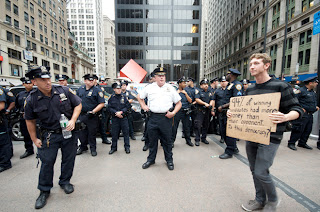 This week, the Occupy Wall Street protesters were kicked out of Zuccotti Park.  The Occupy Movement has gotten a lot of attention in the US because while  most Americans identify with what the protest is about, they don't feel that the movement has been very successful.  And many Americans have the "Maybe if you stopped protesting and got a job, you'd be of better use to all of us."  A troubling trend that I've noticed emerging, particularly on my business school student-heavy Facebook newsfeed, is the idea that the protesters just chose a bad career path and are now suffering the consequences of it.  For example, one of my friends (who really is a great, witty, intelligent guy- don't mean to call him out on this post, but it's really pretty indicative) posted the following:


For the OWS people. You don't have jobs not because you are being oppressed. It's just that you don't have usable skills. Even though that art history major with a concentration in coffee making liberal arts degree seemed awesome in college, the real world doesn't owe you a job just for getting a useless degree.

I'm a second-year MBA student, so I am very, very likely to be working for The Man.  In fact, in the next few weeks, I will be accepting a job offer, so I know I'll be working for The Man.  I am thrilled to be doing so because I think that is where I'll make the greatest positive impact.  I chose to follow a path that included what my friend above calls "usable skills."  I went to school and learned things that, luckily for me, are currently valued in the job marketplace.  That does not make me smarter than someone else.  It doesn't make me more hardworking than someone else.  It certainly doesn't make me better than anyone else.  You know who makes up the unemployed right now?  At least a few rocket scientists who were affected by NASA's budget cuts.  Those people are a heck of a lot smarter than I am.

What bothers me is the implication that everyone should choose a study trajectory based not on their interests, but on where they'll make the most income.  It's really scary because then we have people who switch from astrophysics to finance, and physicists who believe the world is a completely rational place making all sorts of complicated models on Wall Street, and then being shocked when the market doesn't work according to that model.  Really, how many more management consultants do we need?  I can't imagine the world needs so many of them.  It's just that those are the companies that are hiring students out of college, and those students aren't completely certain what they can do with a BS in Physics.  Applying to grad school seems to be one of the only options.  The same goes for those who major in art history.

Saying that they have no marketable skills is a slap in the face.  They have all sorts of valuable skills, but they need to go through a hell of a lot more to get to a level of education in which those skills are valued, and many people can't afford to go to school for that long.  To me, it's more upsetting that our world today does not have viable employment options for the musicians and artists and historians than that these people chose to get skills that aren't easily transferable to a traditional work environment.  When did we stop valuing these studies that are so, so important to our collective cultural intelligence?  How much poorer would our world be if we didn't have people like Plato, Rumi, Einstein and Beethoven in our past?  How many modern-day Rumis and Einsteins and Beethovens are we pushing to conform like square pegs into round holes, and we'll never even realize the loss of them?

There are many big, seemingly insurmountable problems in the world.  Hunger.  Disease.  Water scarcity.  Genocide.  Climate change.  The list goes on and on, and nowhere on anyone's list is "General decrease in creativity and curiosity."  Curiosity is what drives all major theories and discoveries in the world, from Pythagoras to Einstein, and creativity is what brought us such amazingly diverse things as Angkor Wat, computers and the escalator.  And they don't come just from management consultants or computer scientists or engineers.  They come from academicians and artists and philosophers and biologists.  Our world needs people who think outside the box.  These skills are extremely important because we just don't know where they'll lead.  But in our current economic downturn, we just don't seem to value them any more.  And it shows at all levels.  More and more science majors change their minds and switch to study other things.  They too want marketable skills.  And the world at large loses another great mind that could have been a game changer.

I'm not saying that everyone should go out and become an art history major, or struggle through ten years of higher education to get a PhD. in civil engineering.  I joined business school believing fiercely that business can be a force for good in this world, and I plan to use the skills I've gained to do just that.  I wouldn't be nearly as effective in a role that required me to do calculus.  But I hope that while I focus on the business side of things, there are other people out there who are majoring in art history, so that I can visit museums and understand the beauty that came before me, that people study science so that I can see the world's resources be used more effectively than they are being used now, and that others become writers so that I can have my heart wrenched by the next Great American Novel.
Musings by Aarti at 11:40 PM