Musings: The Garden Party and Other Stories

Soon after receiving my now-beloved Kindle as a birthday gift, I went to the Project Gutenberg site and searched for works and authors that I really wanted to read but had difficulty finding in used bookstores and libraries.  I went through much of the Persephone catalog, for example, and did a search for many of the authors that publisher features.  Of those authors, I found a true treasure in Katherine Mansfield.  It has been a long time since I read a short story collection, but The Garden Party and Other Stories is a beautifully evocative collection of fifteen stories that aches of loneliness in large crowds and isolation from people who have become strangers.

I admit when I started this book, I did not expect much.  The first story, "At the Bay," was told through the point of view of so many characters, and in such a stream of conscious style, that I had no idea what the plot was (I am unconvinced that there was one) or how all the characters were related to each other.  I think there were perhaps twice as many characters as there were pages in the story, and I didn't much care for the style.  But I got over that when I read the second story, and the one for which the collection is named, "The Garden Party."  It was so sweetly told, and captured such a perfect moment in time through the eyes of a young girl.  The story touched on such themes as the end of childhood, death, innocence, the class system and family relationships.  It was beautiful, and I relaxed, knowing that I was in the hands of a skilled storyteller. 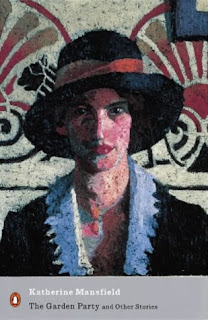 I didn't love all the stories in this collection, but so many of them touched me very deeply.  For me, short stories are so, so dependent on the characters and the author's language.  There aren't enough pages for a strong plot to develop, and so the most capable storytellers (in my opinion) focus on providing us a vivid portrait of their characters.  I soon came to realize that this is a very melancholy set of stories.  Many of the characters are older women.  Several have lived their lives in the service of others and now realize that they are alone and terribly lonely.  Others center on a couple, and the terrible moment that can arrive, unexpectedly, that makes you realize how little you know the other person.  Some are about young girls, on the cusp of adulthood, and realizing that it is very bittersweet.  Only a few are told from a man's point of view, but they are devastating in their emotional impact.

And that's what clinched this book as such a winner for me.   Katherine Mansfield grabbed tight onto my heart, and just kept pulling at it and then she gave me the sniffles, and made my eyes well up with tears and my whole body just ache, and I loved her for it.  This collection was so heart-rending in all the right ways, I can't even tell you.  But here are a few moments that did me in:  an old woman, walking home alone after a long day of work mourns the death of her beloved grandson but can't think of anywhere she can go to just let go and cry because she doesn't want to make a scene; a man, desperately in love with his wife, who realizes that she nursed another man to health even though she barely ever touches him; a wealthy old man, exhausted, thinks that he is invisible to his family; two sisters come to terms with the death of their tyrannical father, only it's too late for either of them to venture out on a new life for herself.  Just small glimpses into the minds of people we might otherwise pass on the street without a second glance.  Glimpses that make you realize just how beautiful and horrible and beautiful and ugly life can be for every day, normal people, and the devastating effects of decisions that each of us must come to terms with.

This theme is communicated to readers in such beautiful, descriptive prose, too.  I loved the following lines:


"Her laugh was like a spoon tinkling against a medicine-glass."

"She was only at the beginning of everything.  It seemed to her that she had never known what the night was like before.  Up til now it had been dark, silent, beautiful very often- oh yes- but mournful somehow.  Solemn.  And now it would never be like that again- it had opened dazzling bright."

Oh, I fell completely in love with Katherine Mansfield, and I hope you will give her a chance, too.  The Garden Party and Other Stories is available here on Project Gutenberg and here on DailyLit.
Musings by Aarti at 12:30 AM