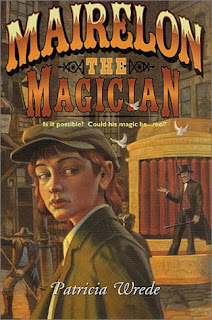 I loved Patricia C. Wrede's Enchanted Forest Chronicles growing up, but I strangely never knew she had written anything else.  I certainly did not know that she wrote a duology set in a magical Regency England, way before setting fantasy books in historical time periods was cool. So when I heard about Mairelon the Magician about a month ago, I bought it (and its sequel) almost immediately.

Kim is a 17-year-old girl who dresses like a boy, making her independent way by stealing and spying in London.  She's done well so far, but she has some people she'd rather avoid, like Dan Laverham.  She's hired by a shady-looking gentleman for a ridiculous amount of money to find a silver bowl in Mairelon the Magician's wagon.  She looks for it, but is caught by Mairelon himself, who instead of turning her into the authorities, offers to take her in as an apprentice.  Kim agrees, wanting to put as many miles as possible between her and Dan Laverham, and they go off together along with Mairelon's faithful sidekick, Hunch.  But people are still after that silver bowl and Mairelon, she finds, is trying to solve a mystery of his own.


I have read many, many books set in Regency England before and consider myself pretty familiar with the slang and colorful language of the day.  But this book exhausted me on that front.  Kim doesn't say one sentence that doesn't have at least 50% slang in it.  Considering that this book is aimed at middle grade readers, I have no idea how they would understand anything she said.  There is dialect used by many other characters, too- Hunch, Miss D'Auby (a French emigree) and all sorts of innkeepers.  I have mentioned my dislike of dialect before, but at least in that case, it was only secondary characters that used dialect.  In this one, it was the main character and I got tired of it real fast.  For example:


"He thought he'd gammoned me proper," Kim said.  She took a perverse pleasure in betraying the toff who'd gotten her into this.  "But if it was just a bet, why'd he let me talk him up to five pounds?  And why was he so nattered over that whicher-bubber?"

I understand what she means, yes, but is all that necessary?  (And what the heck is a whicher-bubber?  Here it is referring to a silver bowl, but I have no idea why.)  And, more importantly, would a 12-year-old understand it?  I don't know.

It's unfortunate, really, because I think I would have liked Kim more if she was easier to understand.  But she wasn't, and I never felt that close to her.  That, perhaps, is also due to the fact that there is probably a cast of 20 people in this book.  And many of them use slang.  So they all got very confused in my head and I couldn't really tell them apart.  One of them in particular, named Freddy, was very similar to one of my favorite Heyeros, Freddie Standon of Cotillion.  He was a bit of a dim bulb at times, but very sweet and manages to punch a villain in the face and down him, even though he isn't exactly a boxing champion.  And that's exactly what Freddy in this book does, too.

I am being very negative about this book, and I think that's because I had such high hopes for it.  I was really looking forward to a fun adventure through Regency England.  And actually, I did get that.  The last few chapters in particular are pretty hilarious (and quite Heyer-esque), with an attempted robbery gone very wrong.  The book's pace is also very fast; before I had time to digest what just happened, we were off to discover something else.  So I do have hopes for the sequel of this book, Magician's Ward, which I hear is more tightly-woven and hopefully has fewer characters and less slang.  And it's silly, really, to expect at 28 to have the same magical reaction to an author that you had at 10.  But I know Patricia Wrede can write, and write better, than she did here, and I hope to see more of that in the second book.