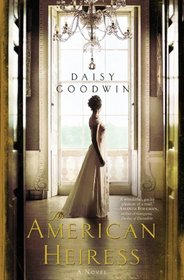 Daisy Goodwin's The American Heiress is a book that I was both excited and nervous to read.  It is full of those ridiculous accolades books these days get- comparing it to the works of Jane Austen and Edith Wharton and probably any other author who writes about the English class system.  This generally sets off warning bells in my head because well, quite frankly, there aren't many people who can write like Jane Austen (or Edith Wharton, I presume, though I've never read her myself).  It's putting a lot of pressure on Goodwin to compare her to those two.

There were other blurbs, too, saying that The American Heiress was a "guilty pleasure" of a read, and that set off all sorts of warning bells.  Jane Austen and Edith Wharton aren't really guilty pleasures reads to me.  I think more of Phillippa Gregory and the bodice-rippers as guilty pleasures.

So it was with some trepidation that I started this book, especially upon learning the heroine's name was Cora Cash (I mean, really?) and that one of the opening scenes is her bullying her maid into teaching her how to kiss properly, complete with a practice run between the two girls.  (Pretty sure Jane Austen would never write that scene!) Cora is the richest heiress in America in the 1890s, and her mother is determined that her daughter will have an English title to go along with all that money.  So they travel to England where Cora has an unfortunate riding accident, is rescued by an attractive man who just happens to be a duke, and spends about a week recovering at his ancestral home, much to her mother's delight.  (Jane Austen definitely already wrote that scene.)  The duke eventually proposes, and Cora begins her life as the Duchess of Rakeham.  But she soon learns that money does not a duchess make, and must deal with the travails of English high society even while she realizes that she doesn't know her husband very well at all.  And her maid?  She's got problems of her own to deal with, too.

I am trying to put my finger on why I didn't love this book, and I think the main reason is that I didn't feel tied to any of the characters.  Cora is the center of the story, but I felt her character was inconsistent.  Her maid, Bertha, kept describing Cora as wasting away as duchess, unsure of her role, unable to gain respect from the servants and unaware of the complicated maneuvers required to succeed in English high society.  But her husband the duke referred to her as light and strong and confident, and it seems like he saw a completely different Cora than Bertha did.  I tend to believe Bertha because, when we're inside Cora's head, she doesn't seem confident at all (except in her money).  She's tired and confused and not at all the bright light of flirtation and youth we met at the beginning of the novel.  Instead, Cora talks about how she has to put on her "brightest American smile" and soldier through difficult situations.  But what is an "American" smile?  How is it different than any other country's smile?

There were many details introduced in the book that weren't panned out in relation to Cora.  For instance none of the servants showed her any respect.  I think this was probably something a lot of American heiresses faced when they went abroad.  But we don't learn how Cora struggled or dealt with it.  We just see it happen.  Similarly, Cora has a portrait painted that is a little bit risque by English standards.  But we don't really get to see the fallout from that either because she goes off to the countryside and doesn't hear all the gossip.  And all the very real tension between her and her husband about the fact that he gave her a title and she gave him the money- that would be fascinating to learn more about, but aside from one scene in which the two argue, we don't get much depth on that, either.  It seemed to me like the most interesting things about Cora's story were glossed over.

But really, the character that most confused me was her husband, the Duke.  The man seemed to be bipolar, super-attentive and loving one moment and then cold and distant the next.  We never get to know him very well, and so it's hard to sympathize with his character at all.  So the dramatic revelation he gives to Cora and readers falls flat because there's no reason to believe that he feels strongly about anything or that his behavior is likely to change.

To me, this book had a lot of period detail and a promising plot, but the characters didn't do much for me.  I wanted much more from them than they were willing to share with me, and I wanted much more complexity and shades of grey, but what I was given was mostly black and white.  I think this book is much more the escapist read than the Austen-esque one.  Good for a flight or a beach, but not one whose characters are likely to stay with you very long.  If you enjoyed the BBC/PBS airing of Downton Abbey, this book may be a good companion to that mini-series; it's like the prequel, telling the story of a rich American girl trying to adjust to life as an English gentlewoman.  But if you are looking for characters that will move you and stay with you long after you close the last page, I suggest you stick with Jane Austen.

Note:  This review is based on an advanced reader's copy.  I received this book for free to review.
Musings by Aarti at 11:11 PM