Musings: I Shall Wear Midnight 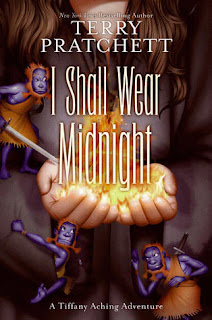 I Shall Wear Midnight is the fourth book in Terry Pratchett's Tiffany Aching mini-series within the Discworld series.  I think it may rank as my favorite, though I do adore The Wee Free Men.  Sadly, it may also be the last of Tiffany's adventures as it wraps up in a happy-sigh-inducing way at the end (pretty much the same sigh I breathed at the end of The Thief of Time, when I saw what Pratchett had in store for Susan).

In this adventure, Tiffany is back at home tending her witch's steading of the Chalk, doing the things that need doing, as she says.  Helping relieve some of the old Baron's pain, delivering babies, cutting toenails and giving baths.  But then news comes that a violent crime has been done to a young girl, and though Tiffany saves the girl, she hears muttering from the people that Tiffany does more harm than good.  This muttering gets louder and louder and Tiffany must confront the evil that is seeping into people's minds, turning them to hate and fear instead of reason and good sense.  She also has to deal with a blond-haired, blue-eyed, beautiful new Baroness-to-be who cries a lot, an overbearing Duchess who hates her and a trip to Ankh-Morpork.  Luckily, she has her trusty friends the Nac Mac Feegles with her, plus a few other true winners we get introduced to through the course of this novel.

I've mentioned here, here and here why I adore Terry Pratchett so much, going on and on about how fabulously he portrays his female characters- they are strong, smart and utterly reasonable.  Tiffany is no exception and I've come to love her as I love Susan, Angua, the Duchess of Sto-Helit and so many more in his wonderful pantheon.

But all of Pratchett's characters are like this, in their own wonderful ways.  They are all strong and smart, but they are also kind.  They may not understand exactly how other people think, but none of them ever feels that she (or he- his male characters are built of similar stock) is better than anyone.  Just different.  And all of them have this wonderful idealism that causes them to fight for the rights of people who are weaker than them, fight against ignorance and cowardice.  I honestly love every single one of them, but I admit to loving some more than others, and Tiffany Aching is one of those some.

I admit to being slightly disappointed that the Nac Mac Feegles had a smaller role in this book than in the previous ones, though they definitely make their presence felt wherever they are.  I was also really sad not to read one Nac Mac Feegle say "oh, waily waily waily!" once the whole book!  But I understand.  This book, more than the others in the series, is Tiffany's book.  She has come into her own, she makes her own decisions and deals with the consequences.  She accepts help when it's offered, but she also stands on her own two feet.  In a similar way, I think we saw a new side of Rob Anybody of the Feegles, too.  He is still hilarious and blood-thirsty, but in this book we see how willing he is to defend his family and home, and just how righteously angry he can become.  I loved it.

If I haven't convinced you to pick up Pratchett in any of my previous reviews, I can't imagine that I will do so now.  So I will just leave you with this:  in one of her many very lucid comments on my blogs, Jill of Rhapsody in Books compared Terry Pratchett (an author she has never read but seems to understand perfectly) to e.e. cummings, describing a poem in which someone loves cummings because he understands that "we and worlds are less alive than dolls and dreams."  It's a lovely thought and I think it describes Pratchett's writing perfectly.
Musings by Aarti at 11:05 PM