Review: Lady Vernon and her Daughter 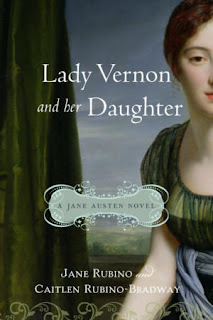 Title: Lady Vernon and her Daughter

Favorite Line: Mrs. Johnson and Mrs. Manwaring congratulated Lady Hamilton, declaring what a fortunate thing it was for a girl when an early engagement relieved her of the tedious business of accomplishment.

Plot Summary:
Lady Vernon and Her Daughter is a full-length novel based on Jane Austen's early, unpublished work, Lady Susan. Austen's epistolary work portrays Lady Susan as conniving and amoral, determined to find well-to-do husbands for herself and her daughter. The mother-daughter author team of this novel turns Austen's on its head, portraying the two in a much more favorable light. I have never read Lady Susan, by Jane Austen, so I cannot say how plausible the Rubinos' spin on the tale is. I found their version of the story to be engaging and entertaining.

Lady Vernon is widowed suddenly by a husband whose will was not changed before his death. She and her daughter are left with very little money, as most goes to her husband's heir, his brother. Susan unwittingly becomes the desired object of a married man, and thus becomes the focus of unkind rumors that scurry about society in letters and exaggerated conversations. This is mostly because she is recently widowed and of course, everyone wants to pair her up with someone. Her daughter, Frederica, is not spared, either. She is described as being dull and stupid, a fairly harsh assessment of a girl whose father has just passed away. The story explains how mother and daughter deal with the rumors about them and find happiness (in true Jane Austen fashion) at last.

In terms of language and interaction, I found this novel true to Austen's sharp wit. The authors made an effort to convey the tone of Austen's writing, and I appreciated that. The main characters, too, were fleshed out and interesting, though there was a very large cast, and I found the connections confusing. There is a family tree provided at the beginning of the novel which I used a great deal at the beginning. An additional cast of characters not directly related to the Vernons would have been useful as well. But Jane Austen never provided that and fully expected her readers to grasp the connections between her characters, so I can only applaud the ability of authors 200 years later to do the same thing.

The main quibble I had with the novel was one misunderstanding on the part of gossip-mongers that persisted throughout the whole story, about which gentleman was courting which lady. That seemed to stretch past the belief point to me- I don't know why people kept insisting on those particular pairings when other ones would make far more sense. I apologize if that is a very vague and hard-to-understand statement to make, but if you read the book, I think you'll know what I mean. I also thought that one of the love stories was rushed. As in, it seemed that the gentleman fell in love with the lady over the course of one conversation. I think the romance could have developed over more time.

Other than that and a few minor plot points (and a confusion as to how the main character went from Lady Susan in Austen's work to Lady Vernon in this one- having not read the original story, I can't say if this is a great change in the story), I enjoyed this novel. I generally do not like Austen sequels or rewrites, but I think I enjoyed this one because I've never read Lady Susan and so did not automatically compare it with Austen's novel. The Rubinos did a great job of being true to Austen's tone, littering the story with gentle irony and poking fun at high society.
Musings by Aarti at 5:56 PM