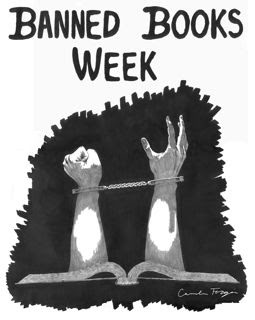 The paper burns, but the words fly away.
-Akiba ben Joseph
Yesterday marked the start of Banned Books Week in the US, and I celebrated by going out to Chicago's gorgeous Newberry library to hear authors of banned books read their stories aloud. After that, the authors signed free copies of their books and gave them away to attendees. It was a pretty great celebration of reading and free speech.

I have never understood the concept of banning books. It seems counter-productive to me, considering how much attention banned books receive. And really... what exactly are you trying to shield people from? People ban books on the basis of violence, language, racism, perversion, abuse, sexuality. But what does this accomplish? Banning Slaughterhouse Five will not erase the Holocaust from history. Banning To Kill a Mockingbird because it includes "offensive language" will not magically stop those words from ever being uttered again. What sort of life are you giving your child when you refuse to let him see exactly what sort of world he will encounter? Will sheltering him from reading racial slurs in books somehow save him from hearing those words on the playground? Will he be better off, ignorant of the atrocities committed by people in the name of religion or country through history, when he enters the world as an adult?

I understand, in some ways, the desperate hopes of parents to shelter their children from the horrible reality of our world. But if you bring someone into this world, the least you can do is prepare them properly to contribute to it. And the entire notion of banning books, magazines, TV shows, movies, video games... that is denying them the opportunity to learn about and know the world around them as it is, and forcing them to adhere to some ideal world of their parents.

You might ban The Golden Compass, but it is still written. Those ideas still exist; someone thought them important enough to set words onto paper, another person thought them important enough to publish, and then many, many people thought them important enough to purchase, and then to read and discuss. Your ban will not change that. Your child, no matter how you may hope to shelter him, will grow and change. He will not become exactly as you wish him to be because he is not yours to control and raise in a sterile environment. He will interact with others, he will form his own opinions, he will separate himself from you, and he will eventually become an adult who decides what he reads and believes and fights for. He will do this regardless of whether or not he reads Of Mice and Men. He will do this in the world that truly does exist, not in the cookie-cutter one you hoped he would join.

There are many books that I dislike. Strongly. They are ones that I would prefer my children, if I were to have any, not to read. There are a handful that I wish people would not buy. There are several that disturb me, deeply. But I would never dream of taking them away, of withholding them from the people close to me. I would never consider that I had the right to dictate can and cannot be read and understood by someone else. I would never rate others' will power and intelligence so low that I could say, "Reading this book will damage that person."

Read what you want. I may lift my eyebrows at your book's cover, and I will certainly judge you for reading Twilight, but I will always celebrate you for reading.
Musings by Aarti at 11:39 AM