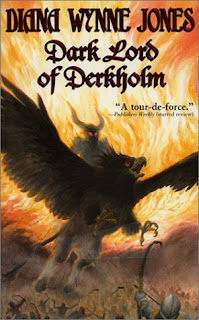 Favorite Quote: No living creature has the right to claim wisdom. There is always more to find out.

Plot Summary:
Derk is a kind, unassuming wizard who just wants to enjoy life with his wife, two human children, three griffin children, sarcastic geese, friendly cows, flying pigs and horses, and carnivorous sheep. This idyllic (and sometimes chaotic) existence is rudely interrupted when he and his son, Blade, are chosen by the Oracles to be the Dark Lord and a Wizard Guide, respectively, for the upcoming tourist season. You see, for forty years, Derk's world has been devastated by Pilgrim Parties organized by a Mr. Chesney from an alternate universe. Pilgrim Parties are comprised of tourists from Chesney's world who want a fantastical adventure (who wouldn't?) and so pay Chesney a great deal of money to organize excursions of several weeks long in which they encounter elves, dwarfs, demons, dragons, pillaged cities, a war of Good against Evil, and a Dark Lord.

The only problem? Well, Derk's world is magical, yes, but nothing at all like we imagine in our fantasies. And so every year, the citizens must go to a lot of trouble making their cities look besieged, their people starve, turning their happy homes into Citadels of Doom, fighting battles, burning good farmland, and generally being put to a lot of inconvenience. And frankly, they're all tired of it. The story revolves around Derk's family's efforts to meet the impossible expectations of these Pilgrim Parties as everything falls apart around them, while also finding ways to end the tours once and for all so that their lives can return to normal.

Wow, there is a lot going on in this story! The cast of characters is massive, and there are so many plot details that show up, disappear, and then come back to be explained (in sometimes very random ways) at the end of the story. Diana Wynne Jones does this a lot in her novels- introduces random occurrences and developments, and then explains them all away at the end. It's a bit annoying, in my opinion, as she doesn't really develop the possibilities of those (many, many) plots- she just introduces them and then explains them away. I think that happens a lot in this book, more than in the others by her that I've read. But that's because this book really tackles a whole lot. Honestly, in the hands of other fantasy authors, it might have been a trilogy or more. Here, she packs it quite neatly into one volume.

I enjoyed the book a lot- the main characters were interesting and fun, and the plot moved along at a spanking pace. But I think there was just so much going on that I got overwhelmed. Jones does a really good job of giving her characters distinct personalities, but since there are so many of them, quite a few that seem very interesting don't get much of a chance to shine. Even Derk doesn't get as much plot time as you would expect from a title character. But Blade, his son, is a likable character, and his opinions on other characters in the book are spot-on. I also liked all the griffins, but I didn't think that they were as fleshed-out as they could have been, as characters. I think it might have been easier if Wynne Jones hadn't made Derk's family so large. Then she could have more fully developed the characters we encountered.

Also, there is just so much going on, plot-wise, that some sections seemed very rushed or hastily put together. There was one aspect of the plot, about a particular character's alcohol addiction, that was kind of random. And the alcohol addiction supposedly explained another plotline (one of those explained at the very end of the story), but it was quite haphazard to me and didn't ring true.

That said, it's a really tongue-in-cheek look at the fantasy genre and what we expect from it. Sort of a Hitchhiker's Guide to the Galaxy for epic fantasy. It's witty and funny, and the story has a lot of heart. I think Jones dreamed big for this novel, and then tried very hard to get every idea she had for the story crammed in here. And let's be honest- I am a bit biased when it comes to Diana Wynne Jones. I tend to give her the benefit of the doubt. Any author who can think up a story that involves carnivorous sheep is a winner to me.
Musings by Aarti at 3:40 PM