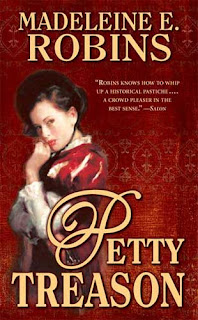 Plot Summary:
The second (sadly, of only two) book in the Sarah Tolerance mystery series set in an alternate Regency period of British history. Miss Sarah Tolerance is a Fallen Woman living in Regency London, making her living by doing private and discreet investigations for the well-to-do. She is approached by a Mr. Colcannon to investigate the violent death of his brother-in-law, the Chevalier d'Aubigny, who was found bludgeoned to death in his own bed. As Miss Tolerance soon discovers, there are more people that wished the Chevalier dead than alive, as he was a cruel husband, a lakcluster employee and all around, a bad apple. As Sarah delves deeper into the mystery, she comes into contact with London's darker, seedy side and a plot that may involve treason and royalty as well as murder.

Here I go again, indulging in my love of all things Georgian and Regency! I thoroughly enjoyed Madeleine Robins' first book in the Sarah Tolerance series, and as I wanted a shorter story to read before picking up Hilary Mantel's large Wolf Hall, I thought this would be the perfect book for me to read at this time. It does not disappoint. Regency London in Robins' world is one in which women are given just a bit more freedom than they were during the actual English Regency- just enough to make for some compelling adventures on the part of Sarah Tolerance. I also had a lot of fun trying to pinpoint the changes Robins made to history, particularly the history involving the Royal family, and why she chose to make those changes. It was amusing for me and says a lot about Robins as a writer, I think. Alternate histories can be difficult, depending on the initial point at which the author chooses to break with history. The main basis of this series is that, rather than the Prince of Wales becoming the Regent, George III's wife took on the role. However, she is very sick in the books, and so there is a huge power struggle between all the king's sons as to who may become the next Regent. It's fascinating and I'm quite depressed we don't have any further books in the series to read. But maybe Robins will find a small press publisher for Sarah Tolerance and my world will be righted once more.

If you are not a Regency aficionado like me, but just enjoy historical mysteries, I think you'd find the Tolerance books up your alley as well. The story moves quickly, the mystery has many nuances and levels, and the characters are engaging. It's also interesting to learn about judicial history and how it used to work. Or did not work, as the case may be. Also, Sarah Tolerance is a very interesting character, and I would really enjoy getting to know her better through more books. She does not indulge in self-pity, she refuses to let the world dictate how she should act, and she is handy with a sword. Good stuff all around, I think.
Musings by Aarti at 10:35 AM