The naive, lonely girl gets her man 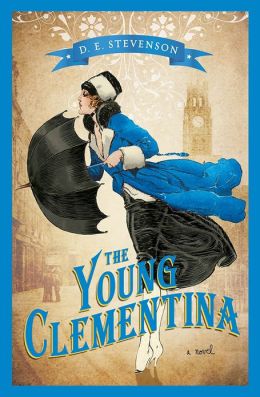 D.E. Stevenson is an author I've wanted to read for a while now.  She was a Scottish woman who wrote in the first half of the 20th century, and I had a vague sense that she would be something like Barbara Pym, an author that I've really enjoyed.

So I was quite excited to accept The Young Clementina to review, though it did take me a while to actually get around to reading it.  But that's what vacation is for!

The Young Clementina is about Charlotte Dean, a lonely, poor librarian living in London after WWI.  Charlotte tells us her story - of an idyllic childhood in the country, falling in love with a handsome gentleman, Garth, and then finding that gentleman much changed after he returned from the war.  And then struggling through life when her true love married her younger, prettier sister instead of her.  But life doesn't end just because it doesn't work out the way you want it to, so Charlotte goes on with her life and then gets a jolt back to the past when Garth asks her to raise his daughter while he goes abroad.

This was a quick book to read, and I'm sure you can guess just how the story ended.  I didn't mind that.  It's pretty standard in books of this sort (though not the case for Barbara Pym, which is why I heart her).  I appreciated that Charlotte was an older heroine, in her early and mid-30s, and not breathtakingly beautiful.  I also liked that Charlotte was very aware of the change in Garth.  She acknowledged that some of it was from the war (and it does seem likely that he suffered some form of PTSD), but instead of martyring herself through that, she realized that he was now a mean, bitter person, and moved on with her life.  I do wish Charlotte had more friends (not all single women in their 30s are sad!), or at least enough that she didn't feel the need to address her letters to some random woman she met once on a bus and exchanged five words with (this really happens).  But I suppose Charlotte having no friends and still being a kind, good person sets her up as worthy of a life of success and happiness.  Good for her!

And really, Charlotte was a kind and good person and as she gains confidence in herself you can see her becoming fun, too.  While she is quite slow on the uptake sometimes, particularly with respect to her sister's shenanigans, I assume that is to show her as being quite innocent and guileless and unwilling to suspect others of hanky panky.

I am being facetious, of course.  Some aspects of this book just were too pat for me.  Charlotte's personality and transformation were two of them.  The central misunderstanding was another.  And while I always get called out in the comments section for saying things like this because I apparently don't cut authors from the past enough slack on their lazy and passive racism, I really didn't like the way Garth went off to Africa in search of a "lost civilized tribe" that he thought he had discovered because of a skull he used shady science to analyze.  Seriously.  Apparently spending years and years in trench warfare was not enough to convince him that Europeans aren't all that civilized.

In any case - this was a pretty light-hearted and easy read, if not particularly ground-breaking.  Definitely a good one for vacation!