The Goose Girl, adapted for awesome 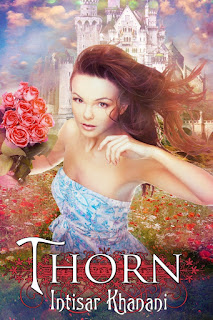 I considered leaving the cover completely off this review because it makes the book look like it's about some sort of pageant queen with the power to create castles and unicorns out of a field of wildflowers, and THAT IS NOT AT ALL WHAT THE BOOK IS ABOUT.  So, please ignore the book cover and focus on my words because this story was so, so good!

I bought the book after Tanita reviewed it for #Diversiverse last year but only got around to reading it while on vacation.  Shame on me.  It was completely absorbing and I strained my eyes reading it on a very dark and bumpy bus ride.  It was worth it!  Also, it's only $3.99 on Kindle, and if you buy the e-book, you don't have to look at the cover, so there is zero downside.

Thorn is a retelling of The Goose Girl from the Brothers Grimm, though after reading Thorn, I realized I am not at all familiar with the story of The Goose Girl.  So I don't know how true this story is to the original, but it's true to itself and that's what matters.

Princess Alyrra is from a small, landlocked kingdom that everyone else pretty much ignores, and she likes it that way.  It gives her the freedom to escape the cruelty of her mother and brother to spend time in the stables or the kitchens, where she feels most comfortable.  But all that is taken away from her when she is betrothed to Kestrin, prince of a far more powerful kingdom.  Alyrra goes to start her new life, but on the way, her identity is switched with her lady-in-waiting's by a powerful sorceress.  And then Alyrra must decide whether she would prefer to be an anonymous goose girl or a princess that can not only save the prince's life but also bring more justice to her adopted country.

I feel like I failed to encompass all this book has to offer in that plot summary.  So let me try to convince you to read this some other way.

What I loved most about this book was how honest it was in its assessment of the world.  Prince Kestrin is absolutely fascinating.  At the beginning, I was certain he was going to be a golden boy, perfect in every way except maybe a little blind about the princess switcheroo.  But he's not like that at all.  He's really complicated and Alyrra rightly doesn't know whether to trust him or not.  And she calls him out on all of his empty gestures, too, which was wonderful and gave me so much food for thought.  She points out that he doesn't know how to just give something without expecting something in return and that bribing people won't make them trust you.  And she tells him this in such a wonderful, thoughtful way that you just want to give her a big hug.

And Kestrin isn't the only complex character in the book.  There is a Robin Hood character with a small but important role in events, the sorceress who is given a surprising amount of depth and humanity, and the girl who stole Alyrra's place, for reasons that come out later in the story.  In a way, Alyrra is the least complicated person but that is only because we're in her head the whole time so we know what she's thinking and what motivates her.  While her actions seem completely honorable to the readers, they might have a completely different spin if the story were narrated by someone else.

Another thing I loved about this book was the ending.  I don't want to give anything away, but it wasn't the traditional "and then they lived happily ever after" ending.  Instead, it was so true to the story and to the characters and really acknowledged that it takes time to build trust and love between two people.  So perfect.

This really is such a sophisticated and beautifully written adaptation of a classic story (which, admittedly, I have not read).  It's full of three-dimensional characters motivated by so many different factors, and while it's a first novel, it's so well-written you wouldn't be able to tell.  I have gotten all of Khanani's other books that are available on Kindle now, too.  Though I wish there was a sequel to Thorn.  Both Alyrra and Kestrin went through so much in this story and I just want to see how they face the future and grow into the adult versions of themselves.  There's so much scope for more!

Highly recommended.
Musings by Aarti at 7:30 AM