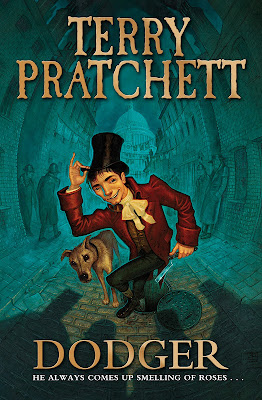 Terry Pratchett's Dodger is set in Victorian era London and populated by many notables of that period - Charles Dickens, Sweeney Todd, Sir Robert Peel, and a few more names that will jog your memory.  The main character, though, is the Dodger of the title, a happy-go-lucky, street savvy teenager who makes his living by finding coins in the sewers.  Dodger has a chivalrous streak; one night, he sees a woman being beaten by thugs and saves her life.  And then spends most of the book trying to figure out who did it and how he can keep her safe.

Dodger is very kind person - that's clear from the very beginning and it's one of the most simple reasons I love Terry Pratchett so much as an author.  All of his main characters are very nice and clever and practical.  This may seem like a small thing, but I don't know that it is - there are a lot of authors who write a few nice characters, but not many who write so many consistently nice characters as Terry Pratchett does.  Sure, that may lead to very black and white renditions of good vs. evil, but I don't think that is in any way a negative with Pratchett.  He brings to light so many OTHER things that you probably don't think of very regularly that the whole good vs. bad thing kind of takes a back seat.

One of the things that Pratchett brings to light in this book is the economic inequality that existed in London during Victorian times.  Dodger is what would be described in Disney's Aladdin as a "street rat."  He lives on his wits, really only has one set of clothes, and doesn't always go to bed full at night.  Each day, he interacts with people who live a hand-to-mouth existence, who are completely invisible and often disappear, and no one notices.  He spends his days below ground in the sewers.  But Dodger has managed to survive, to thrive, even.  And he's happy, and he answers to no one.

Contrast that with the woman he saved, Simplicity, who is obviously very wealthy but is terrified of being found by her husband and has no control over any aspect of her life.  Until she realizes that she can control her own life and sets about doing so.  And this is another thing that I love about Terry Pratchett.  He is a feminist.  While I wasn't a huge fan of the whole "Simplicity and Dodger fall in love because he saved her life and she is beautiful" storyline, Simplicity herself was very self-confident in the time we spent with her.

Hand-in-hand with Pratchett's descriptions of Victorian life is his clear respect for Charles Dickens.  I admit that I usually think of Dickens as a very prose-y man who said in ten words what everyone else said in two.  But here, he shines as a reporter determined to bring public attention to the London underworld, bullying MPs and taking tours of the sewers and making up stories.  He was actually quite fun and I can see that when I next read a Dickens book, I will focus much more on the underlying commentary about economic inequality than on the wordiness.

I know this is unfair, but I couldn't help but wish that this book was set in Discworld.  Dodger knows the streets of London so well and interacts with so many varied characters, but I just kept comparing him to Commander Vimes and he just kept coming up short.  Dodger is charismatic and fun and he spends the entire book determined to help Simplicity.  I appreciate all those things.  But he didn't struggle with decisions, really- he knew what he wanted to do and he did it.  Whereas Vimes (and even the characters that populate Pratchett's Nation) struggles a lot with his decisions, every step of the way.  The world to Dodger just didn't seem as complex or nuanced, even though he has been through so much in his short life.  I just felt distanced from him and consequently from the whole story, and I did not love this story nearly as much as I love Pratchett's other books geared to young adults.  Perhaps because there is no magic?  I do so love the way Pratchett uses magic in his stories.  Whatever the reason, I think if you are coming new to Pratchett as a teen, you should start with the Tiffany Aching series instead.
Musings by Aarti at 7:30 AM