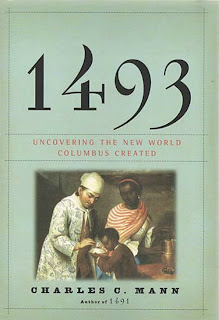 I read and loved Charles C. Mann's 1491:  New Revelations of the Americas Before Columbus, so when I heard that Mann had a companion book out, I was very excited to get my hands on it.  1493 in some ways picks up where 1491 left off, except that it dramatically increases the scope of the research.  Instead of focusing on the Americas, Mann gives detailed accounts of how the Columbian Exchange impacted the entire world.  Yes, the Europeans brought disease and took tobacco, but that is just one tiny piece of a colossal whole.  As in his previous book, Mann gives us a spectacular perspective on the continuing effects of what happened- "nothing less than the forming of a single new world from the collision of two old worlds..."

Often when we are taught history, we are taught in silos.  "This is what happened in Europe at this time.  This is what they were doing in India then.  In the US, they were dealing with something totally separate."  What I most appreciated about 1493 was that Mann brought all of these histories together and made clear just how intricately they were connected.  Silver mined in South America by African slaves was minted in the Spanish empire, but 80 to 90 percent of it went to China.  These are links that textbooks rarely make, and it was amazing to see just how global the world has been for so long.  And just how completely our world changed when the Americas were discovered.

I said that what I most loved about this book was Mann's ability to bring together so many disparate threads to give us a full picture of world history.  This is not a Eurocentric account.  It's not about the victimization of Native Americans and Africans.  It's not about the trade wars that occurred in the Far East.  Mann presents every major player as ambitious and flawed.  Instead of saying that the Chinese were isolationist because they had nothing to trade with Europe, he points out that China was so far advanced over Europe in the Middle Ages that Europe had nothing to offer that it could not get itself.  That is, until all the silver of the Americas was made available.

It was absolutely fascinating for me to read just how much the sweet potato changed the landscape of China, the rubber tree changed the landscape of Laos, the potato plant led to the Industrial Revolution, and sugarcane had such a profound impact on everything.  Also, that the Little Ice Age that started in the 16th century can possibly be blamed on the death of so many Native Americans that no longer burned the forests, leading to a huge decrease in the amount of CO2 in the atmosphere.  So the exact opposite of what is happening now happened in the 16th century and caused an ice age because the forests grew so much.  HOW AMAZING IS THAT?  Also, earthworms were brought to the Americas by Europeans.  ALSO AMAZING.  Also, you can survive very well on a diet of just potatoes.  They have almost every essential nutrient you need to be healthy.  So go ahead, eat those French fries.  They have saved more lives than yours.

I enjoyed every chapter of this book but was completely blown away by the chapter on the effect of disease, especially malaria.  I cannot even attempt to describe to you just how much malaria has shaped our world.  But what was most disturbing was the way Mann tied malaria to slavery:


"Inherited malaria resistance occurs in many parts of the world, but the people of West and Central Africa have more than anyone else - they are almost completely immune to vivax... Add in high levels of acquired resistance from repeated childhood exposure, and adult West and Central Africans were and are less susceptible to malaria than anyone else on earth.  Biology enters history when one realizes that almost all of the slaves ferried to the Americas came from West and Central Africa.  In vivax-ridden Virginia and Carolina, they were more likely to survive and produce children than English colonists.  Biologically speaking, they were fitter, which is another way of saying that in these places they were - loaded words! - genetically superior...Their immunity became a wellspring for their enslavement."

Mann goes on to explain how African immunity made slaves a better investment than European indentured servants, and... well, you can guess how things went from there.


I was also astounded (yes, I'm using a lot of extreme words here, but they are TOTALLY JUSTIFIED) by the history of Asians in the Americas.  I realize this sounds silly, but I didn't have any idea that so many people from China and India and all over Asia came to the Americas in the 16th and 17th centuries.  This was so cool to read because, quite frankly, Asians are left almost completely out of American history in school until the Gold Rush.  Mann puts us right back in there and makes clear just how integral we were to the political and cultural evolution of the continents.  I love him for doing that, and for detailing just how complex and mixed and confusing race became in South America because so many people were descended from so many different places.  He includes a series of illustrations and terms (a lot of very specific terms!) that describe people of mixed race heritage in Mexico and just how complicated the hierarchy became when people started worrying more about bloodlines and less about making alliances.


There are so many wonderful stories and facts and circumstances and people presented in this book.  I wish I could gush about them all, but I am still reeling from learning so much that shifted my perceptions so completely.  So I shall end with a quote from the wonderfully eloquent Buried in Print, who puts it perfectly.


"Sometimes I feel as though with books like this, which can dramatically alter the way that you view the world, that each chapter is the equivalent of an entire book; your brain can only expand so much in a few pages, even when you're vehemently wishing that it would take it all in. "

Exactly.  Read this book.  Your brain will thank you for it.
Musings by Aarti at 7:30 AM