Musings: Where the Mountain Meets the Moon 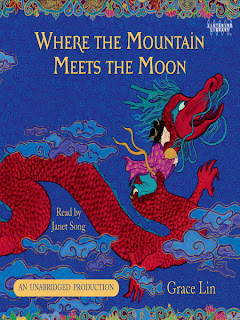 I'm on a quest to read more fantasy novels written by people of color.  I love the genre but dislike the stereotyping that is so prevalent within it.  As usual, I am not entirely sure how I first heard about Grace Lin's Where the Mountain Meets the Moon, but it went straight onto my wish list.  And I was so excited to learn that the Chicago Public Library offers it as a digital download audiobook.

In retrospect, I wish I had read this book with my eyes, not my ears, because I've since realized that the accompanying illustrations are stunning.  But the story stands very well on its own, too.  Minli is a young girl growing up in a poor village that sits in the valley of Fruitless Mountain.  Every day, she and her parents and neighbors work very hard to plant their rice and till their fields, but their struggles never seem to end.  (In a wonderful instance of book serendipity, I am concurrently reading Charles C. Mann's 1493, and he spends quite a bit of time describing the droughts that plagued China for years and could very well be the time period for this book.)

Anyway, the bright spot in Minli's day is storytime with her father.  Each evening, she escapes to a wonderful history of dragons and gods, greedy magistrates and kind villagers.  But at the same time, she hears her mother's constant worries about money.  Inspired by the stories and by a chance encounter with a fish seller, Minli sets off on a quest to change her family's fortune.  Along the way, she makes new friends, learns important lessons, and hears important stories, all of which are a treasure for readers. 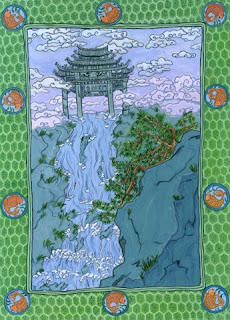 The easiest way to describe this book is to say that it is like a Chinese Arabian Nights for children.  There are layers and layers upon stories, wrapped inside and around each other, featuring recurring characters and similar themes.  The stories are populated by fantastic creatures like dragons, yes, but there are also the wily magistrates and kind-hearted commoners that feature so prominently in folk tales.  The book is targeted at a younger audience (probably around ages 8 to 12), but as an adult, I found the stories rich and engaging.  The characters were developed well enough for me to know their personalities, and even those that had only short cameos were memorable.  I wish I could spend more time with them, especially those that were only in the book for a fleeting moment and then left behind. 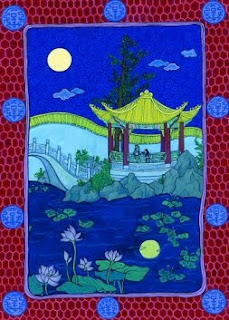 I also really liked Minli as a main character.  She is kind, intelligent, and loyal and really appeals on a universal level.  I didn't love her parents quite as much, but this is because her mother was portrayed as being pinch-faced and nagging, while her father was kind and warm-hearted.  I wish that the characters had been less black and white at the start of the book, or that the book hadn't made so clear that the mother was in the wrong and the father was "right."  After all, it is reasonable for a woman to worry about feeding and providing for her family, and I wish the mother's stress had been presented in a more compassionate manner.  But this is nitpicking, as the book is targeted at a pretty young audience, and it makes sense to present the characters in this manner. 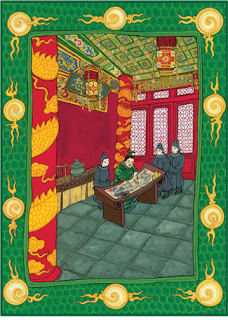 The tone and voice of the story were fantastic!  I loved the Chinese imagery and lyricism, with place names like Never-Ending Mountain, characters like the Flightless Dragon and the Green Tiger, drinks like Dragon Well Tea and stories that feature characters named The Old Man of the Moon, who only answers one question from one person every 99 years, and lessons about contentment and kindness.

I was completely enamored with the story-telling, and the narrator of this audiobook (Janet Song) did a fantastic job with pacing and expression- I really felt like I was listening to a storyteller.  I only wish that I could have experienced these rich illustrations, too, as an accompaniment.  This is a book I would definitely purchase for a child, if I had a child to give the book to.  Highly recommended.
Musings by Aarti at 7:30 AM