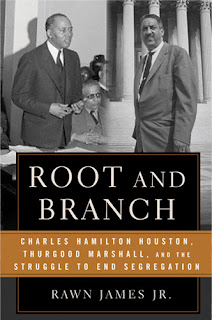 Root and Branch:  Charles Hamilton Houston, Thurgood Marshall, and the Struggle to End Segregation is the first audiobook I have really listened to in a long time.  I listened to the end of Middlemarch on audiobook, but this is the first full book I experienced in audio on my commute to and from the new job.

Thurgood Marshall is remembered for being the first African-American justice on the United States Supreme Court.  He also is a familiar name because he fought on the monumental case Brown vs. Board of Education, which ended the "separate but equal" doctrine for segregation of schools in the United States.

But Marshall was worthy of inclusion in history books well before Brown vs. Board of Education.  Under the guidance of his friend and mentor, Charles Hamilton Houston ("The Man Who Killed Jim Crow"), Marshall successfully won many cases at the US Supreme Court as a lawyer for the NAACP.

I don't know how school children are taught history in other countries, or even in other parts of America.  But in my experience, we learned history in very specific timelines.  We learned about colonization, we learned about the Revolution, we learned about the deepening divide between North and South, the Civil War, the World Wars and then, very briefly, the Civil Rights movement.  But there was no real link between one era and the next.  We learn about slavery ending and Jim Crow coming into existence, but we're made to think that African-Americans just docilely accepted their fates until Martin Luther King, Jr. came to the fore.

And that is completely false.  As Root and Branch makes clear, there were so many people working so hard for so long to bring equal rights to people in America, from the end of the Civil War, through the World Wars, and sparking the Civil Rights movement.  I thoroughly enjoyed learning about two of the most prolific individuals in this book.  Houston and Marshall were so devoted to their cause, working tirelessly for little money, in very dangerous circumstances.  It was fascinating to learn about all the cases that came before Brown vs. Board of Education, so crucial to ending segregation little by little and making America (and people around the world) realize just how unjust the system of Jim Crow was.

This is an excellent book to bridge the gap between the post-Civil War era and the Civil Rights movement, to understand just how much was happening in America at the time.  The narrator was easy to understand and very engaging.  The only thing that was difficult for me to follow was the timeline - in audiobook form, I realized, I am much worse at keeping dates straight.  But that was my own problem, and not the fault of the book.  Highly recommended.
Musings by Aarti at 7:30 AM