Musings: The Shadow of Albion 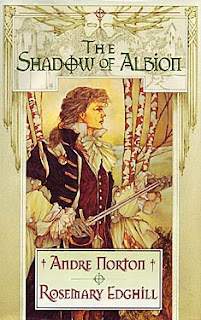 The Shadow of Albion is the first book in the incomplete (and probably never to be completed) Carolus Rex trilogy by Andre Norton (whom I found out in the introduction is a woman) and Rosemary Edghill.  It's the sort of book that appeals to all my literary weaknesses - a fantasy novel set in an alternate 19th century England, with a strong helping of mystery and espionage and a dash of romance thrown in.

Here, the Stuarts still reign over the British Empire, after Charles II passed on his crown to his oldest (Protestant) son rather than to his younger (Catholic) brother.  They also still rule the colonies in the US and are constantly at war with France.  England is one of the few Protestant nations in Europe, and that fact informs a significant amount of the action in this book.

The book begins with the Sarah Conyngham, Marchioness of Roxbury on her deathbed, in a world different than our own.  The marchioness it turns out, has a part to play still in the history of her country and so her death would be hugely inconvenient.  Instead, she changes places with another Sarah Cunningham, this one an American from our world.  Sarah Conyngham dies in our world and Sarah Cunningham takes over her role in the alternate history.  There she meets many people, including her long-time fiancee, the Duke of Wessex, who also happens to be a high-level spy for the King.  As you might expect, crises of international importance follow, and it's up to Sarah and the Duke to keep England safe.

I really loved the first half of this book.  It was witty and fun and very fast-paced.  I think that if The Scarlet Pimpernel were to be made significantly more sexy by Ian Fleming, perhaps, then the result might be the Duke of Essex.  When we first meet him, he is parading as someone just as frippery as the Scarlet Pimpernel (but saying "La!" far less, which I appreciated), and then coolly unwinds his fob watch and uses the chain to discommode someone while pulling a hidden pistol out of his quizzing glass.  Serious awesomeness.

Sarah Cunningham suffers in comparison, but then who wouldn't?  Her skills lie in being nice and straightforward.  Not quite the same as whipping a dagger out of her knitting needles, but I suppose we can't all be undercover spies.

The Duke and Sarah and all the secondary characters interact in what shapes up to be a very complex and interesting world.  Much like the Lord Darcy series of short stories really fleshed out the political climate in place in the Plantagenet dynasty of the 1960s, so too does The Shadow of Albion make clear just how much history can be impacted by seemingly small changes.  The French Revolution still happened and Napoleon is still trouncing all over Europe, but here there are hints that the Dauphin still lives, and England desperately needs to make a treaty with Denmark so that there is more than one country to fight the Emperor.  I also appreciated just how much the Catholic-Protestant balance was brought to the fore in this novel.  It's an issue that had a big impact on England in our world, and I liked how Edghill and Norton played it out in their created world, too.

I wish, though, that the two would have just left the romance out of this book.  It is not in any way central to the story, and then when it flares up, it seems out of place.  When Sarah and Wessex meet, they do not trust each other and are very wary and secretive.  They spend hardly any time together at all.  Halfway through the book, Sarah has the following scene:  "Sarah ground her teeth in irritation rapidly turning to fury...Pure furious anger swept away all the ambiguity and uncertainty of the last several weeks and the last clinging cobwebs of her strange dream.  Wessex had offered her a mortal insult, and Sarah was going to make him very sorry that he had."

That is very close to the last scene Sarah has with the Duke for about 170 pages.  Any other scene they have together ends with angry words and fights, and Sarah running out of the room crying, "I wish I'd never been born!"  (Dramatic much?)  They do not interact, they do not see each other, they do not communicate in any manner.  You would think, in this case, that the "mortal insult" that Wessex had offered Sarah would still sting.

But NO.  Instead, COMPLETELY OUT OF NOWHERE, Sarah falls in love with her Duke, even though he has done zero in that time frame to change her opinion of him because, oh wait, they have not communicated with each other at all.  She tells someone matter-of-factly that the Duke does not love her.  "And even as she said that, a tiny part of her deep inside cried out that it did not matter, because she loved him, the man she had crossed universes to find..."

There is so much in this book that is great.  The fantastically realized alternate world.  The spy gear.  The political climate, so true to our own and yet so different.  The language that is so evocative of Regency England.  The ways in which historical figures come into being here, from Beau Brummell to the Marquis de Sade.  Clearly, this is a book that had a lot of thought and consideration and discussion around it, and the authors put that work into writing their novel.  So why, oh why, did they tack on a romance on in such a manner?  I get so frustrated by authors who feel like they have to pair all their characters up at the end of a book.  Or, if the characters are eventually going to get there, at least help me as a reader believe that the story is going in that direction.  Don't just dump it on me out of nowhere.

I wish I could say that this aspect of the book was small enough to not impact my enjoyment of the novel.  But it did.  That said, I fully appreciate the world that Norton and Edghill created here, and am glad to have found so many books set in alternate historical worlds.  They really appeal to me!  Do any of you have suggestions for other alternate history novels I should read?
Musings by Aarti at 7:30 AM