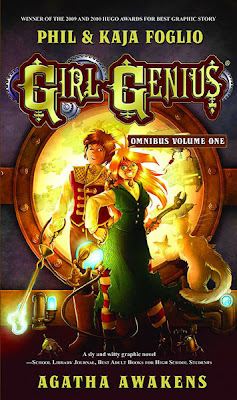 HOW FUN IS THIS COMIC SERIES?  I'll tell ya- so much fun.  Girl Genius:  Agatha Awakens is a compilation of the first three stories in Phil & Kaja Foglio's Agatha H. comic series that centers on a science genius girl who is preparing herself for saving the world.

That's right.  Agatha is not only a blond bombshell, but she is also a ridiculously skilled scientist.  How awesome is that?  Really, really awesome.

But let me back up.  The book begins with Agatha Clay, a student at the local university who works in the laboratory.  She is not a very good student, though, and nothing she makes ever works.  One day, on her walk to school, she is robbed.  The thieves take the locket she has worn every day of her life since she was five, and the only reminder she has of her long-dead parents.  After the loss of her locket, Agatha's life changes quickly and drastically.  She meets Baron Wolfenbach and his son, is abducted from her home in her underwear, makes new friends on Castle Wolfenbach, a massive spaceship in the sky, and then begins to make amazing gadgets in her sleep.

Suffice it to say that her life is much more eventful than mine.

There is much to love about this book.  The illustrations are bright and lively.  The cast is multicultural, funny, and smart.  You get thrown immediately into the middle of the story and scramble to catch up, but are so swept up in the action and the color and the jokes that you don't really mind that you don't fully understand what's going on.

The Girl Genius comic is available in its entirety online.  This collection comprises the first three adventures in a series that now has 12 episode arcs.  Therefore, it has a very unfinished feel to it and most of the book feels like it's creating the setting and fleshing out the main characters.  If you regularly read comics of any kind, this probably won't bother you.  I don't read that many serial comics, but this aspect of the book wasn't a problem for me at all because the book was just so much fun! 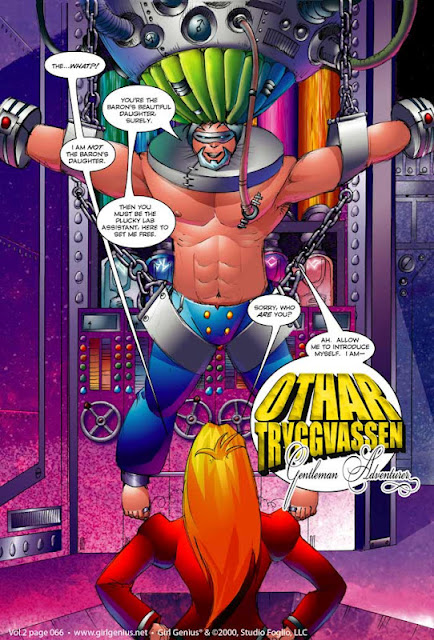 I loved Agatha.  She's confident, smart, and funny.  I could go on and on about how fantastic it is that she is a science genius who happens to be a girl.  I love that the title of this comic is "Girl Genius."  I love that once she realizes she's gifted, Agatha doesn't spend time mulling over whether men will find her attractive if she is smarter than them, or that maybe her life will go down a different path than she expected.  She just owns her awesomeness and moves forward.  This is just the sort of book I would want all the pre-teens in my life (admittedly, there are not that many of them) to read because it doesn't present smart girls as being different or odd or unattractive.  It presents smart girls as being.... well, smart.  And proud of it.  And that was wonderful. 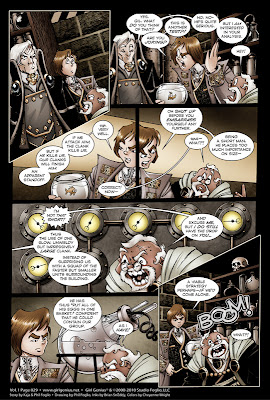 There is also a full cast of characters besides Agatha, and they are all so easy to like, too.  There are mad scientists, though at the end of the book, I had no idea if any of them were evil mad scientists or just scientists with different philosophies about how to run the world.  There are just so many funny moments between the characters, so many little jokes that had me smiling in appreciation.

And this is one of those graphic novels that rewards people that look closely at the pictures.  There are so many little details here that you could miss, but that add so much fun to the story.  Such as a vat of green, bubbling ooze with the sign, "Do Not Drink."  And labels for various mechanical instruments in the store room.  The time and effort and love that the Foglios put into this series is obvious, and I really appreciated the little touches they added in unexpectedly.

This is a really fantastic series about a girl genius, her friends, and her quest to find herself.  The illustrations are vivid, the jokes are funny, and the characters are easy to love.  I highly recommend you check out the comic series online.  And if you happen to have any pre-teens in your life, this would make an excellent gift!  Highly recommended.
Musings by Aarti at 6:30 AM