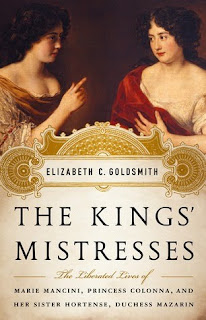 I am le tired of non-fiction books with titles that misrepresent the actual content that resides inside aforementioned books.  The Kings' Mistresses:  The Liberated Lives of Marie Mancini, Princess Colonna, and Her Sister Hortense, Duchess Mazarin by Elizabeth Goldsmith is one of those books.  (Rule of thumb:  If a non-fiction title is really long and has lots of "spark" words like mistress and liberated, it is probably lying to you.)

The Mancini sisters were fascinating, beautiful women that are worthy of biography, BUT... they were not particularly "liberated," nor were both of them mistresses of kings.  Hortense was mistress to Charles II of England, but I don't think Marie was mistress to anyone, though she was Louis XIV of France's first love. (But was she also his mistress?  I did not get that sense from the text, but Perhaps.  I.  Am.  Really.  Dense.)

The Mancinis were sisters who were lucky enough to be nieces to probably the richest man in Europe in the mid-17th century, Cardinal Mazarin.  The Cardinal introduced them to the French court, they dazzled with their beauty and wit, men fell all over themselves vying for their hands, and Cardinal Mazarin unerringly matched both with two men entirely unsuitable to the girls' personalities.


Marie married into a very old, very aristocratic, very wealthy family in Rome and spent three happy years with her husband, during which he had built for her a massively ridiculous bed in the shape of a seashell (alas, a Google image search yields no pictures/prints of this), the couple built a home theater, and the two starred in plays and operas and ballets performed in their home theater.  Then, for reasons glanced over in the text, Marie became terrified for her life, thinking her husband wanted to kill her, and ran away.  Her younger sister Hortense had a very similar story - her husband was completely insane.  Also bizarrely paranoid and controlling.  For instance, he took a knife and hammer to the priceless and AMAZING Mazarin art collection one day when he was angry.  So she ran away from him, too.

The rest of the book details Hortense and Marie traveling around Europe, trying to find kind noblemen and sympathetic abbesses who would take them in and keep them safe from their crazy husbands.  Apparently, this is the time period during which they were "liberated," but I feel that spending years of your life begging your estranged husband for money that is rightfully yours, and then running away from said husband's goons sent to forcibly bring you home, and then being locked up in convents, and then fighting a losing battle in courts for some sort of settlement does not a liberated life make.  Rather than the exhilarating feeling of "Girl Power!  Yeah!" that I expected to get from reading this book, I was left with a rather disturbed and depressed feeling of just how little power over their lives even women of means and noble titles had.  I mean, Hortense's husband was COMPLETELY INSANE.  Everyone knew it.  He also spent all of Hortense's substantial inheritance on horrible things that made no sense.  Everyone knew THAT, too.  And yet, legal rules and society in general at the time believed that he had the right to control all the money.  In fact, even though ALL OF THE PEOPLE knew that he was the worst money manager in the world (and also really, really angry at his fleeing wife), Louis XIV decided that the best way for Hortense to get her annual income was to first give the money to her husband (yes, the insane one who can't manage any finances) and trust him to pass on the money to her (the wife who ran away from him and refused to ever see him again).  For real.  As though this was a plan without a down side.

What was interesting was that the husbands tried so desperately to get their wives back.  To the extent that they sent letters to various heads of state, including the Pope, set out spies, locked them up in hard-to-reach convents and forced one to leave the Continent and reside in England.  And yet... the whole point of all these actions was to drive the women back into their homes.  From a modern perspective, this is just bizarre, in an "I hate and despise you, now come back home where you belong!" sort of way.  Also bizarre is that two women so despised their husbands that they took off without any notice and refused to come back, but then continued to correspond with those husbands, pleading for money to support their lifestyles.  It makes so obvious that these really were not liberated women, but ones that were so desperately unhappy with their marriages that they were willing to risk poverty and ignominy to be free of them.  And at every step of the way, various heads of state and their social peers were trying to push them back where they didn't want to go.

As is often the case with short biographies (in this case, 226 pages for two people), I left this book wanting much more meat to the story than I was given.  What made Marie so certain that her husband wanted to kill her?  How did what started as a happy marriage devolve into such hatred?  And how did Hortense use her relationship with Charles II to her advantage?  What did she think of England, compared to France?  What arguments were put forth during the trials for separation, and how did these two set precedent for the future, when other wives wanted to leave their husbands?  I wanted Goldsmith to zoom out of the story a little and show me the bigger picture, but she never did so, and I was left disappointed.  And thoroughly grateful that as a woman in the 21st century, I can control my own income and be sure that I have the ways and means to escape horrible situations such as those faced by the Mancini sisters.
Musings by Aarti at 7:30 AM