Musings: The Map of Time 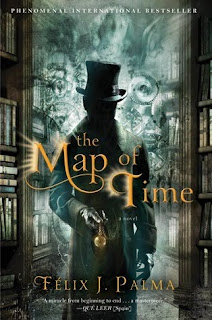 The Map of Time, by Felix Palma, is a massive novel about H. G. Wells, time machines, the power of suggestion and the desire to change past decisions.  It is really three novellas in one volume, all revolving around H. G. Wells' novel The Time Machine and a man named Gilliam Murray who claims he can transport people to the year 2000 to witness the final battle between the survivors of the human race and the automatons.  The first is about Andrew Harrington, a wealthy young man who falls in love with a Whitechapel prostitute who is then murdered by Jack the Ripper.  The second is about Claire Haggerty, a woman who believes herself to be in love with a hero from the future that she met while time traveling.  The third is about H. G. Wells himself, and the task set for him to save the world from rogue time travelers.

Weighing in at over 600 big pages, there's a lot going on in the plot that I didn't fit neatly into the three sentences above.  There is, in fact, so much plot that I didn't feel much connection to the characters; they seemed dwarfed by the story arc Palma created.


For example, Andrew Harrington spends eight years depressed, thinking about how perfect his life would be if he had just managed to save his lover from murder.  He's so depressed that his faithful cousin finds a way for him to travel back in time and change events.  But for me, this didn't ring true.  We barely ever saw Andrew interact with his lady love, except for two pretty innocuous conversations, and considering the circumstances, I can't imagine that they'd have lived happily ever after the way he imagines.  So it was hard for me to believe that he was so affected by her death, and quite cynically, I think that if she had not died in such a fashion, he would have gotten over his obsession soon enough.

The other characters seemed a bit more realistic- Tom Blunt, a main character in the second part of the story, was much more open with his feelings and motivations.  H. G. Wells was the central character, and while I have no idea if Palma portrayed him realistically, he was also an interesting character to get to know.  I think of all three story arcs, the second one was the one I most enjoyed because the characters were so genuine and easy to like.  It in many ways reminded me of The Time Traveler's Wife with all its time-folding and the sense of inevitability the characters felt about their actions.

The third part of the story was by far the most complicated and drawn out.  In it, rogue time travelers (reminiscent of what I remember from the Thursday Next series) are going back and forth in time, changing events and leading to all sorts of modern complications.  It's up to Wells to uncomplicate matters.  At this point in reading the book, I was impatient for the end.  There are so many long passages describing scenes and feelings and scientific possibilities, and long monologues and letters detailing what life is like in the future, and what people in the future have done, and how things are different, etc., that I resorted to skimming several paragraphs.  That said, the premise of this story is very intriguing in that it presents characters with a choice:  if you could go down a different life path, would you do it?

And I think that's what appeals to people about the concept of time travel.  People like the idea that they can go back to earlier days, change key moments in history, and alter the path of the world.  Or not even the world, but change the arc of their own life stories.  It's so tempting to think that you would have been a great inventor/author/politician/scientist if only you lived in different circumstances.  And this book makes clear the power of that suggestion, the ability of people to suspend disbelief if it is a beautiful lie they prefer to their own reality.  It's a powerful idea, and Palma winds and tangles it in an impressive manner.

But the idea itself is so large that the characters fall beneath the pressure of it, and inevitably, this book ended up being one that didn't click on all levels for me.

Note:  This review is based on an advance reader's copy.  I received this book for free to review.
Musings by Aarti at 11:06 PM