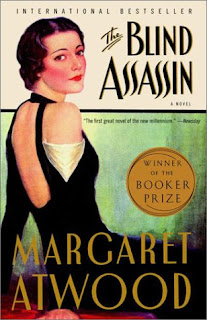 In her intricately woven novel, The Blind Assassin, Margaret Atwood gives us the life story of Laura and Iris Chase, two sisters whose fates are intertwined from their first recollections to their last.  Daughters of a dissolute and extremely wealthy factory owner, both Laura and Iris are raised in the lap of luxury by their parochial mother, but when she dies, it is up to their housekeeper Reenie and Iris herself to do the job of raising the sisters, a job that their father cannot do.  While Iris is mostly a solitary young girl and woman, Laura is more flighty and taken by strange notions and beliefs that shape her consciousness and the way that she views the world, a fact that will change both her destiny and her sister’s.
Meanwhile, running concurrently with the story of Laura’s and Iris’ lives, a third story, housed within a second, is taking place simultaneously. A young woman is having an affair with a man who is on the run, and the two are forced to meet in various abodes that he has been able to negotiate. The young man begins to create a fantastic tale for the woman’s entertainment, of an alternate universe where aliens make hostile overtures, bands of a renegade tribes are on the loose, and where human sacrifice is the order of the day. The hero of this universe is the titular blind assassin, who will go to great lengths to live up to his calling. As the story of young lovers and their fantastical story moves forward, it is sandwiched between the continuing life saga of both Iris and Laura, one of whom will end up dead under mysterious circumstances, leaving the other to carry her memory.  Both fantastically imagined, and beautifully crafted, The Blind Assassin is a triumph of literary achievement from one of the world’s most beloved authors.

I read this book with Heather from Raging Bibliomania as one of our sporadic buddy reads.  We have the good fortune of picking really great, meaty books to discuss with each other, and this one was no exception!  What follows is the first half of an (heavily truncated, for the sake of spoiler-protection) email chain between the two of us, chatting about the book.  Check out the second half at Heather's blog today here.


Heather:  I have to admit that a lot of Atwood’s writing (at least the science fiction segments) feels a little experimental at times. Almost like she is trying on lots of different hats under the cover of the one book. I actually think that I like the science fiction sections the best so far because they remind me of the Atwood that I know and have heard about. I think it's really neat the way she is almost braiding the stories together, and also find it weird, because sometimes it takes me a while to get back into the flow of the story once she has shifted gears.

Aarti:  I definitely agree about the experimental nature of her writing.  I wonder why the Blind Assassin bits are written in present tense and without quotation marks.  I always try to think about WHY authors choose to do such things and can never really think of a good reason.  It seems more like stream of consciousness, writing that way.

Heather:  I had been thinking of the whys too as I read this, and one of the things that I came up with is maybe it helps Atwood concentrate on the flow of her ideas, and keeps her from having to stop and put in all the quotation marks, but then I considered that the editors would probably do that.  The other thing I can think of is that she perhaps wants the writing to feel fluid, and the quotation marks just negate that effect.  I have seen it done in many books, but I think it takes a truly good author to make it really work.  I have a feeling that the assassin parts are written in present tense to confuse the reader a bit and keep them on their toes.  Especially when you find out the ending.  I actually wish there were more sections devoted to the blind assassin's story, but I liked it well enough the way it was.

Aarti:  I wish there was more to the assassin’s story, too!  I don’t even really remember how it ended.  I feel it was probably abrupt.  There were two alternate endings, very different, and I suppose that really describes the relationship of the two people involved in the telling of that story, too.  I am a complete sucker for the story-within-a-story idea, though!
I also spent some time trying to figure out how Atwood went about writing this story.  Did she write it the way the book is published?  Did she write one story at a time?  Did she go in some other order?  I think it would be interesting to know how the story came to her in her mind and then the process by which she transferred three separate stories, intertwined in such a manner, onto paper.

Heather:  It stands to reason for me that Atwood is so accomplished at what she does that I believe that she wrote them all the way they were presented.  That may be giving her undue credit, but I also can't imagine that she could have written these separate stories all on their own and merged them all so perfectly.  It was the perfect amalgamation to me, where all of the stories sort of led into each other and blended perfectly, and I liked that she gave hints to upcoming sections and then went on to explain them in further sections of the book.
Musings by Aarti at 7:02 AM