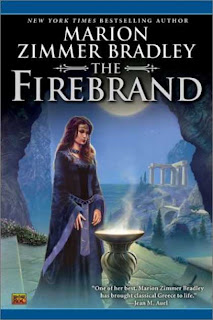 Marion Zimmer Bradley's feminist retelling of the Trojan War, The Firebrand, is oddly named for a man- Paris- and not for any of the women in the story.  The main character is Paris' twin sister, Kassandra.  At a very young age, Kassandra is called to be a virgin priestess of Apollo (unfortunately for any number of men, since she's as beautiful as her brother is handsome).  But the Mother Earth Goddess wants her, too, and Kassandra has trouble walking the line to make both Immortals happy.  Her own personal struggle is set against the backdrop of the Trojan War and the shift from a matriarchal society dominated by worship of the Earth Mother to that of a patriarchal society ruled by the gods of Olympus.

This is another one of those books I've had on my shelf forever but never felt motivated to pick up.  I finally got it down recently because I was supposed to do a buddy read with a fellow blogger.  But I got about halfway through and she told me that she couldn't participate any more, and I (quite gratefully, I admit) set the book aside.  I didn't finish reading it so please note that the below thoughts are formed by reading only about 330 pages of a 600-page book.  I have a feeling the things that bothered me in the first half, though, would continue in the second half.


I don't know much at all about the Trojan War, though I'm excited to be reading The Iliad  with a friend this summer!  The Trojan War reminds me a little of the Mahabharata in that the gods get heavily involved, fighting for their children and their egos and basically playing with humans the way humans play those war video games.  This element is very much alive in The Firebrand, but played out in the manner of the Mother Goddess against Apollo.  The gods aren't given personalities, though, and they really only come and go through Kassandra's visions.  Most of the time, we're stuck with Kassandra as our narrator, and I must admit I didn't like her much.

In Greek mythology, Kassandra is the woman who can see the future and the end of Troy, but is cursed by Apollo so that no one will believe anything she says.  But honestly, her forecasts are always so gloom and doom that I don't blame people for not listening to her.  She doesn't ever seem able to forecast happy things.  Just depressing ones.  And clearly, this has an effect on her personality as she goes through life as though weighted down by the end of the world (which, er, to be fair, she is) and is quite the Debbie Downer, even at weddings and births and festivals.  I can't imagine how miserable it would be to be gifted with the ability to see into the future, only to see destruction and ruin come to all those you love and care for.  It's a heavy burden to bear, and I don't envy Kassandra her life.  All the same, though, it didn't really make her a fun companion to go through the story with.

I did enjoy the premise of telling this story through a woman's eyes.  It was interesting to see (though I have no idea whether this is a valid interpretation of history or not) the way Bradley presented the war as a turning point in history- when women became less important and men more so, whereas previously they had been equal.  I am not sure just how matriarchal society was in Greece before the Olympic gods became prominent, but I can see how upsetting it would be to be a woman alive and witnessing that change.  It was very fun to spend time with the Amazons and learn their way of life, and see all the strong female characters in this book.

That said, I think Bradley preached her point way too much in this story.  It seems like any time two women in the story had a conversation, it was about how much women give up when they get married, or how women should not take a minor role in politics, how there is more to life than marriage and childbirth.  All of which are valid points, but do not need to be brought up all the time.  And then any time Kassandra talked to men, too, it was much the same.  For most of the book, it felt like Kassandra was either forecasting the end of Troy to anyone who would listen to her or getting into arguments trying to justify her choice to be a virgin priestess.  I am all for women's empowerment, but the girl needed some new material.

Alas, even the Trojan War wasn't of enough interest to me to keep me engaged in this story,  I couldn't get through to the end, but I look forward to reading another version of the story when I read The Iliad.
Musings by Aarti at 11:25 PM