Musings: The War Against Miss Winter 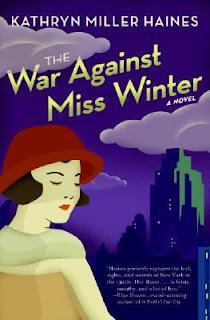 The War Against Miss Winter is one of the very few complete impulse buys I have made in the past few years.  I was walking to my friend's wedding reception and couldn't resist walking into the used bookstore that was on my way to the hotel.  I picked the book up off the shelf, read the description- it is a mystery set in WWII-era New York starring a girl named Rosie (ahem, like Rosie the Riveter).  And, I'll be honest, the cover was very vintage travel poster-esque and I wanted it.

What's it about?  Well, Rosie Winter is a down-on-her-luck actress in New York at the start of 1943.  To pay the bills, she also works as a file clerk in a detective office.  But one day, she finds her boss dead in his office closet, and one of his former clients arrives asking her to find a set of papers belonging to a reclusive playwright, Raymond Fielding.  Rosie's interest is piqued and she starts poking her nose around, with the help of her blond bombshell best friend.

This was a fun mystery novel and it certainly had the feel of 1940s crime fiction.  But, er, is it possible for a book to sound too authentic?  Kathryn Millar Haines clearly did a lot of research on WWII-era New York, from the clothing to the slang (God, did she research the slang) to the mobsters.  But it was dumped into this book in such copious amounts that it seemed a little too much for me.  Did people really go around calling girls "Dollface" that often?  Did mobsters really wear pinstriped suits?  If the word "scram" was used so often, how come it has nearly disappeared from usage in just two generations?  I don't know the answers to any of these questions, but all these stereotypes showed up quite a bit in this novel.  I appreciated the effort, but it seemed too forced to me.  As did the character of Rosie Winter.  She was supposed to be a tough-as-nails, indepdent girl who could hold her liquor and tell off a big scary man with a gun, but to me she came off sometimes as... well, slightly unstable.  She seemed to insult very frightening people in an almost suicidal manner and while I think she was supposed to come off as a female Sam Spade, she just came off as really confrontational to me.

I hope that doesn't brand me as some sort of anti-feminist.

So, yes, the story was engaging if a little over the top.  If I can find the next book in the series in a library, I will probably pick it up, but I won't be buying it.

What really interested me in this story was the peripheral stuff.  This is true of me for many historical mysteries.  I like the background stuff more than the mystery itself.  For example, in this book, Rosie's boyfriend Jack left abruptly to fight in the war.  Before he left, their relationship was rocky at best.  They fought a lot and disagreed on several important issues.  In fact, Rosie implies several times during the book that maybe the relationship would have ended officially if he hadn't left.  But he did leave.  And so she has all these unresolved conflicting emotions about this man that she sometimes liked, sometimes didn't.  She even says, "Jack had become a phantom to me, a memory that faded the longer he stayed away.  I may not have know what I wanted from him anymore, but I still loved him."

How many women had this exact same experience during the war?  Tied to a man by emotional bonds of the past that were complicated to begin with, but now with the additional baggage of a war on.  Rosie says she still loves Jack, but doesn't even know if she wants him.  What if he is killed in the war?  I bet Rosie would have pretty complicated feelings of guilt and remorse and regret mixed in with a strange relief that she is no longer tied to a man she doesn't even know that well any more.  And if he is not killed in the war, and he comes back and they get married in a big adrenaline rush of happiness and love, only to realize too late that perhaps they really are not compatible and they made a mistake... what then?

Reading about Rosie's relationship with Jack- how she felt about him, how unsure she was of those feelings, and  how guilty she felt (and was made to feel) for showing even the slightest bit of interest in another man- really made me think about how dramatic an impact a war can have on people.  It can change lives in ways that political leaders never consider.  What happens to the woman waiting at home for a man that she idealizes, only to realize a few years later that he is not the man she thought he was?  What happens to the man who goes off to war engaged to a woman at home, and then comes back so altered that he doesn't want to get married?  I think that sort of thing happened much more often than we could ever know, and it merits taking a moment to think about how huge an impact something like that can have on one quiet and pretty ordinary life.  While this book didn't blow me away with a fabulous plot or fascinating characters, it did make me pause and think for a moment on one of the smaller aspects of the novel, and for that I'm grateful.
Musings by Aarti at 12:04 AM