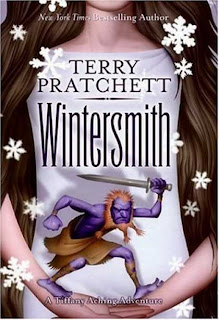 I wanted a seasonal read over winter break and while perusing my shelves, nothing seemed better suited to my mood than Terry Pratchett's Wintersmith.  It's the third book in the Tiffany Aching series (after The Wee Free Men and A Hat Full of Sky) about a young with on Discworld who is fabulously logical and kind and good, but has a wonderfully realistic bit of snark in her, too.

In this tale, winter is coming.  Tiffany and her witch-mentor, Miss Treason, attend The Dance to greet the change of seasons.  Tiffany starts tapping her feet, then snapping along, then swinging her hips and then, lo and behold, she's in the dance.  Except, she's not supposed to be.  To complicate matters, the Wintersmith sees her in the dance, promptly decides he's in love with her, and then sets about wooing her.  Except that Winter is not a person, and so has no concept of how to be human except to show his strength by making a miserable winter.  Tiffany must step into the role of being the goddess of spring to ensure that the seasons continue to cycle the way they are supposed to.

I really enjoyed the first two books in the Tiffany Aching series.  I have gushed before about Terry Pratchett's ability to write strong and good and useful female characters into his stories, and to have them do Pretty Cool Things.  Tiffany is one of those characters.  She is a pretty awesome girl and I love spending time with her.  I love her Third Thoughts, especially- those thoughts in her head she doesn't tell anyone about but that are witty and sharp and often a little bit waspish to others.

That said, this book was my least favorite of the bunch so far.  This saddens me, as there is only one more Tiffany Aching book to read, I Shall Wear Midnight, and I hope I enjoy that one more than this one.  It isn't that this one was bad, really.  It just didn't have the same emotional appeal for me.  There weren't any moral issues at play, no good vs. bad.  There was just a confused god who wanted to be human, a confused boy who wanted to be a hero, and (luckily, gloriously) lots of Feegles and some animated cheese.  I loved Hat Full of Sky because of what a great glimpse into the human condition Pratchett gave us- that we all have unkind thoughts and wish mean things upon others sometimes.  But that doesn't make us bad people, it just makes us people.  It's rising above that and striving to better yourself that makes you good.  I don't think Wintersmith had any great message like that in it, and so it fell flat for me, just a little.

That sad, though... those Nac Mac Feegles are a riot.  I love them and want to be their friend.
Musings by Aarti at 11:04 PM