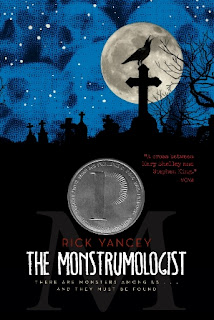 Rick Yancey's The Monstrumologist is the first book in a (currently two book long) series about Pellinore Warthrop, a monster hunter and his 12-year-old assistant Will Henry, in Victorian New England.  Warthrop took Henry in after his parents died in a fire, and since then, Henry has been helping the doctor in his research.  One night, a grave digger comes to their door carrying a terrifying beast, an Anthropophagus, and the doctor realizes that there are over 30 of these man-eating creatures living in his hometown.  He and Will Henry set off on a race against time to hunt these monsters before they attack the whole town.

This book was gory.  Very, very gory.  In a way that probably appeals to 14-year-old boys but definitely made me cringe and skim several paragraphs.  There is great description of rancid teeth, bone-crunching, brain-bashing, limb-tearing... whew.  It was much more than I expected.

But I don't want to give you the wrong impression.  The story was also wonderfully written.  Yes, this book is targeted at young adults (I assume), but Yancey does not write down to them.  There is impressive vocabulary in abundance- not limited to the monster name Anthropophagi.  The writing style, too, was very reminiscent of Victorian era horror or Gothic novels.  A lot of gloom and doom, tons of heavy foreshadowing, creepy and disturbing characters, and all the rest.  Maybe the monsters and blood and gore draw the pre-teen boys in, but the writing is what kept me going.  I do not enjoy horror stories.  They freak me out, they keep me up at night, they disturb my dreams and generally create an unpleasant ruckus in my life that I do not seek out.  But this one had such compelling writing and fascinating characters that I kept going.


I say the characters fascinate me, but I don't know that I loved any of them.  Well, I really liked Will Henry, the plucky orphan who comes into his own.  I also had a soft spot for Dr. Warthrop, but he was not a very nice man.  Really, most of the people in this book were not easy to like.  They were self-absorbed, greedy, prideful and arrogant.  Dr. Warthrop particularly could be grating.  His oft-used phrase was, "Step to, Will Henry!" and by the third chapter or so, I was very tired of reading those words, particularly as they were said in a very autocratic and insufferable voice in my head.  I don't know how Will Henry handled it.  It's very surprising, actually, that I found this book as compelling as I did because usually if I dislike the characters, I dislike the book.  But the writing style just drew me in so well here that I kept going.

One thing I didn't like in this book and which I feel is becoming more "modish" recently (though I think it is originally a Victorian conceit so makes sense here) is the whole "Oh, I just found this bunch of letters/diary/message in a bottle/writing on the wall sitting here beside me one day, and decided to publish it and share with you."  That is very much the set-up of this story, with the author being called into a mental institution to read journals that might be of interest to him.  They are Will Henry's journals, the author is interested, and he shares them with the reader.  I am not sure what the over-arcing story with that will be, but I personally don't see the point of these set-ups and could do very well without them.

Overall, I enjoyed this book, though I found it very creepy and more than a little disturbing.  I have the second book in the series, too, The Curse of the Wendigo, and I look forward to reading that one, too- though I have no time frame in mind to do so.  The story kept my interest throughout, though I would warn you (again) that it's very gory!
Musings by Aarti at 11:05 PM