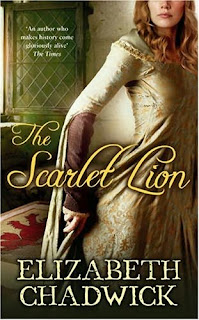 The Scarlet Lion is Elizabeth Chadwick's second novel about William Marshall, picking up shortly after The Greatest Knight leaves off.  While you can read one without the other, I recommend reading both.

There is a lot of ground covered in this book.  Over twenty years, William Marshall serves Kings Richard, John and Henry III.  He fights in many wars with the French, the Irish, the Welsh and even the English rebels.  His popularity at court waxed and waned, and there were times that he did not act quite as honorably as one might believe.  Two of his sons were taken hostage by King John.  His daughter married a rebel.  And through it all, John and his wife Isabelle stand tall.  They also get busy, as it seems like readers have a glimpse of every child's conception in this book- and there were many children!  (William only got married in his forties- so he was pretty old by the time his last child was born, too.)

I enjoyed this book, though I admit I enjoyed The Greatest Knight just a tad bit more.  I think I like the story more when William is the main focus, and in this book, he had to share the limelight with his massive family.

This was such a volatile time in British history, and while the story is action-packed, there were some things I wish I got even more exposure to.  For example, the Marshalls seem to have significant land holdings in Wales, and I'm sure Marshall had a great deal of difficulty with them, but that is only mentioned peripherally.  Also, King John signs the Magna Carta during this book, but it doesn't seem to be a very big deal.  I thought it would be more important, even if Marshall wasn't involved in the process- at least reacting to it.

But obviously, with so much going on in England at this time, Chadwick had to pick and choose what to focus on.  In a time filled with giants of history, they can't all feature in just one book.  And William and Isabelle are fascinating enough to carry this story on their own.  They lived turbulent lives but somehow seemed to find peace and happiness with each other (as evidenced by their brood of children).  I really enjoyed getting to know Isabelle better in this book- she is a strong woman who is aware of her rights and is willing to fight for them.  Actually, seeing Isabelle speak and act the way that she does in this book caused me to wonder exactly when women's rights began to be more and more curtailed.  I am not saying that women were allowed to do whatever they wanted in the 12th century, but it does seem like they had more power than they did in, say, Tudor England.

I also appreciated the more subtle relationship between William and his children.  As he was off fighting for large periods of time, he didn't have the relationship with his ten kids that he wanted.  And, as many of those children were born when he was past fifty, there was also a huge age gap between them.  I liked the way Chadwick acknowledged this in quiet ways, showing how William and his heir didn't always see eye-to-eye and in other various ways with the other children, too.

I enjoyed this story a lot, and I'm glad that Elizabeth Chadwick has brought William Marshall back into the limelight.  It is always so bittersweet when people say things about how people will remember "forever," or a person will "never be forgotten."  But... quite often, people are.  Perhaps paintings or effigies or woodcuts survive from the Middle Ages, but those don't show personality.  One person looks just as grim and proper and cold as the next.  You can't see laugh lines in an effigy or anger in a painting.  So while the people are there, the personalities are not.  Their deeds fade away and there is no one left to tell their stories, and all that is left is a cold stone marking their passing.  Therefore, I am grateful to Elizabeth Chadwick and to other historical writers who bring these people back to life, even after almost a millennium has passed since their birth, so that we can truly appreciate all that they did with their time on earth.
Musings by Aarti at 12:12 AM