Review: The 13 1/2 Lives of Captain Bluebear 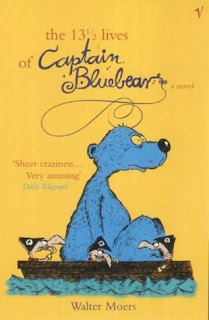 The 13 1/2 Lives of Captain Bluebear, by Walter Moers (trans. from German) was recommended to me by one of my co-workers.  It sounded fun and I love that it is illustrated, so I got it right away.  The novel recounts the first 13 (and a half) different eras in the life of Bluebear, from his birth to his finding eventual happiness.  He starts life on the ocean, is saved from a whirlpool by minipirates, is almost eaten by a gourmet island, escapes through a desert, walks through a giant's head, visits Atlantis and saves the world from a maniacal thinking element.  And that's not all.

He is a pretty busy guy.

This book weighs in at 700 pages.  There is a lot of information included.  There are also lovely and fun illustrations- some that take up two full, face-to-face pages, and some that just take up part of a page.  The illustrations really add a lot to the story.  I wonder why adult novels don't have illustrations, for the most part.  I love them and I don't think they should only be in children's literature.  I think they should be in everything!

That said, I think Walter Moers is one of those authors who is filled with millions of ideas and wants to get them all down right now before he forgets them.  So he puts everything into his story.  Captain Bluebear is only the first book in a series about the fictional continent of Zamonia.  The second book, about a dog named Rumo, also is about 700 pages long.  I am not sure what he put in that book that isn't already in here!

I think this is one of those books that is very witty and clever and fun but only in small doses.  I read it in a few days (including a marathon read over a weekend), and I think it would have been better if I had read it in smaller doses.  Sometimes, the wittiness would get grating.  For instance, the author spends sixteen pages detailing the many life forms that make up the population of Atlantis.  There is no plot in these pages, no interaction.  Just descriptions of various species.  While this can be fun to read for a while, it got old way before the sixteen pages were up.  However, I did appreciate the illustrations.

Often in his adventures, Bluebear would encounter people or situations he had never known before.  At these times, the narrative would pause and we would get an excerpt from an encyclopedia telling us more about that particular phenomenon.  This was fun, too, at first, but would also get tiring.

Personally, I feel that if an author wants to include encyclopedic excerpts and sixteen pages of species descriptions, then he should perhaps write an anthology or a reference book in addition to his novel.  While I enjoyed some of the descriptions, others just annoyed me.  I would have preferred a smoother narrative, with multiple footnotes, or an appendix.  Moers has obviously created a fantastic world and I'm thrilled he wants to share it with me, his reader, but at the same time, I can only absorb so much at a time.

I do think this book would be fun to read with someone.  Some of the descriptions, some of the events, are just so ridiculous that they beg discussion.  It's a book that I think I would want to read with a 14-year-old, if I had one conveniently around me.  And I would recommend reading it only a chapter or two a day (though the Atlantis chapter is really, really long!).

It's interesting because I think this is one of those books that you remember reading, but won't remember anything about.  There is just so much information in it that even now, I feel certain I don't remember much of what happened in the book.  I know how the book feels, and how quirky it is, but I feel like if someone were to ask me in a few weeks, "Oh, wasn't Bluebear's time spent weeping with the hobgoblins so fun?" that I would have absolutely no recollection of hobgoblins.  I blame this on information overload with the book!

I enjoyed reading this book, even though it exhausted me.  I think if I go for it again, I'll take it slower.  It reminded me of an adult version of The Phantom Tollbooth, but much longer and more detailed.  It does have a lot of wordplay and a lot of random, fun occurrences.  I don't know if I can say it really has a plot, but that sounds unfair.  It dos have a plot and a story and it moves forward, but it isn't as though there is an overreaching arc, exactly.  It's much more episodic.  If you're willing to lug it around for a while, you could have a lot of fun with it!
Musings by Aarti at 12:03 AM