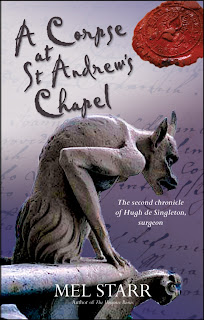 A Corpse at St. Andrew's Chapel is the second book in Mel Starr's mystery series around Hugh de Singleton, a surgeon and bailiff in 14th century England.  A body is found outside an old church in his jurisdiction, seemingly savaged by wolves.  But there have been no wolf sightings in the area and there is very little blood, which leads Hugh to believe no animal was involved.  The dead man's shoes were stolen, too- no wolf would do that.  Hugh realizes things go even further than he originally suspects when, the more he digs, the more he seems to be a target for violence.  Soon, one of his suspects is found dead of an arrow to the back, and Hugh must hurry to solve the case before he is yet another victim of the plot.

I received this book through the LibraryThing Early Reviewers program.  I have not read the first book in the series, but that did not seem to factor into my understanding of the second at all.  The first book is alluded to, but I had no trouble following this story without having read that one.


If I had known previously that this book was Christian fiction, I never would have requested it from the program.  It is not marketed as such, but I would call it a medieval Christian mystery.  I really wish that publishers and authors would be more upfront about whether or not they are publishing faith-based fiction.  It is very frustrating to get a book you think is a straight mystery and then get religious teachings in there, too.  This book is not overt about it- I would say it's fairly understated, but the religious undertones were present and I wish I had known that.  To me, not mentioning that a book is Christian fiction is kind of like subtly trying to convert someone to the faith.  I know that is a huge overreaction, but that's still how it feels to me.

As to the story itself.  Do you ever finish a book, set it down and think, "Meh"?  That is how this book was for me.  Hugh de Singleton is a nice guy, and he has a very quiet, self-deprecating sense of humor.  I liked him, but I didn't feel attached to him.  He seemed to spend a lot of the book getting hit in the head with a cudgel (ouch!  You'd think you'd learn after the first time!), eating (the food descriptions in this book are fantastic, if that's something you like in literature- I do!), and waiting around in the dark for suspects to walk past him (they never do).  This is interesting in a way because Hugh is new at investigating things.  Most mysteries seem to revolve around people who know very well how to go about discovering facts and tracking suspects.  Hugh does not, and it's refreshing to see him make mistakes or follow dead ends.  But I don't know how he had got hit in the head so many times and still did not learn to be more careful.

And Hugh doesn't really even solve the mystery.  He really just kind of stumbles over a suspect, catches him, and then has him confess.  Hugh himself didn't have the full idea- and you can't blame him because for one of the culprits, no clues were given at all about his involvement.  So for me, the mystery fell pretty flat.  Again, this may be because Hugh is a new investigator (and the author is a new author), but this disappointed me.  I also thought the book ended really abruptly.  I suppose this is meant to be a way to segue to the next book in the series, but the last sentence, "They've stolen my books" was not the way I expected the book to end.

What was interesting- besides the great descriptions of food!- were the medical procedures and beliefs presented in the book.  Hugh trained himself to be a surgeon and so we get to see him at work a few times in the book, using only medieval instruments.  He also only has access to medieval knowledge.  For example, one of his patients had a tree fall on the right side of his head (seriously, in this book, it seems as though everyone gets multiple head injuries) and thus experiences weakness in his left arm and leg.  But Hugh has no explanation for him on why this would be so as at this time, no one knew that the right side of the brain controls the left side of the body.

So while I think Hugh is an interesting character, I don't think I am going to read any more in this series.  I didn't like the Christian bent and I thought the mystery was a bit too muddled for me.  I wish Hugh well, though, in his further adventures :-)

I received this book for free to review.
Musings by Aarti at 12:09 AM