Review: Wish Her Safe at Home

Title:  Wish Her Safe at Home


Favorite Line:
There are things money can’t buy, things like fresh youth to replace the one you’ve hardly been aware of, things like lost opportunities which might conceivably have led to nothing, but which on the other hand might have led to fulfillment and serenity and new lives and passionate involvement… And human nature being what it is this is the version you’ll unquestionably believe.


This review is based on an advanced reader’s copy.


Plot Summary:
Rachel Waring is a middle-aged, plain English woman stuck in a dead-end job in 1980.  She has never been in love, never been married, both her parents are dead and she has very few friends.  Thus, when she receives notice that she inherited her great-aunt’s beautiful old mansion in Bristol, Rachel is thrilled.  She visits the house, falls in love with it, notes that it has one of those famous blue plaques on it signifying it was lived in by a (minor and no longer remembered) member of the anti-slavery movement, and decides to move in, leaving her past behind her in London.


She plants a garden with the help of an attractive younger man, begins writing a biography of the 18th century (minor and no longer remembered) anti-slavery advocate and goes about being friendly and cheerful to everyone she comes across  As the story continues, readers have the sense that not all is quite right with Rachel.  She invents a new life- even a new past- for herself as she goes “quietly and genteelly crazy.”

I mulled for a long time about whether or not to include this book as part of the Women Unbound Challenge, and decided to go for it because Rachel Waring is a woman who fights passionately for what she wants out of life- even going so far as to create a new life story.
In the introduction to this book, John Carey states, “…there are really only two alternatives open to [Rachel]… She chooses the other alternative, which is to pretend that her ambitions have been fulfilled- that is to say, to go mad.”  Carey thinks (and I agree with him) that, confronted with the decision to either continue her real, drudging existence in London, or to create a new, exciting one in Bristol, Rachel chooses completely to go with the exciting one.  Even though that way lies madness.  So instead of living the life fate has dealt her, she makes one up for herself and goes for it, all the way.


And one can’t help but admire her for doing so.  Her early allusions to her life thus far- painfully awkward and very lonely- make the reader cry out for her.  As you read the story, you can't help but think Rachel got a raw deal, and that if circumstances had been different, she might very well have had the ideal life  she alludes to in the quote I shared above.

The story is told entirely from Rachel’s perspective.  You are in her head the way that you are in your own, listening to the internal dialogue.  Except that while you inhabit your own head, you know what you say out loud and what you keep to yourself.  Not so here.  Rachel is a masterfully written unreliable narrator.  There are times when you are not sure what she says aloud and what she says in her head (and it seems sometimes that she doesn't quite know what she says out loud, either).  You are not sure if the people she interacts with- the vicar, for example, or the chemist- are as horrible or boring as she makes them out to be.  At the same time, you are frightened for her of her (possibly overly-helpful and over-eager?) neighbors Roger and Celia- are they honest?  Are they gold diggers?  How can one be sure?


Stephen Benatar’s ability to pen this novel successfully points to what a fantastic writer he is.  As readers, you have unadulterated access to Rachel’s thoughts.  When she is uncomfortable, you are uncomfortable.  When she is sad, you are sad.  And there are times when her thoughts are so exactly what yours might be on the occasion.  Or what any woman’s might be, if she is single and believes that she might have missed a chance at happiness.  For example, Rachel has this thought when she encounters a dumpy and unhelpful librarian:

I saw that she wasn’t wearing a wedding ring.  I automatically liked her and despised her and felt sorry for her and was glad.

Benatar’s sentence made me smile in commiseration with Rachel- I've had the same feeling before.  She puts it perfectly, and while some of her thoughts are unkind, it is impossible not to feel completely engaged by her.  She is so realistically flawed.


At times, I worried about Rachel’s vulnerability:  she felt so hurt when people acted as though she were insane, and she was so sensitive to people's reactions.  And I felt just as flustered as she did when people looked at her strangely because, being in her head, I could not always tell whether she had said her thoughts out loud or if people were looking at her oddly for another reason.  So confusing, but so well-written!


It’s painful and sad to see a woman invent a completely false life for herself and tell everyone over and over again how happy she is as though repeating the phrase will make it come true.  But it takes a strange sort of courage and strength to make yourself so happy.  She says, late in the book:

I couldn’t go on in this fashion- rise and shine, rise and shine- unerringly, day after day after day.  Waiting for that red, red robin to come bob, bob, bobbin’ along.  (Along.)  Because I hadn’t got superhuman strength.  Sometimes I prayed for just the ordinary kind; yet occasionally had to wonder whether God could even be listening.

And that’s what is so heartbreaking.  Rachel tries so very hard to be happy and warm and friendly, but does it work?  Readers can't be sure.  Can anyone blame her for turning inwards to a fantasy world of her own making, where everything is perfect? 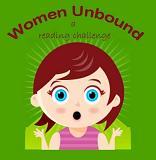 I decided that this book qualifies for the Women Unbound Challenge.  Because, regardless of the method she employed and what it did to her, Rachel Waring is a woman who, after an awkward and lonely existence, decides to do something about it and for a brief, perfect moment, succeeds completely.


I highly, highly recommend this book.  It takes place in the 1980s but to me, seemed to take place decades prior to then- I can’t quite pinpoint why.  The writing is wonderful and the characters are skillfully drawn.  And I love, love, love an unreliable narrator!
Musings by Aarti at 4:00 AM