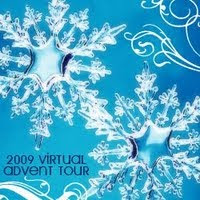 I spent some time mulling over what to write for this post.  We don't have many traditions centered around Christmas (or Hannukah or Kwanzaa) in my family.  If we have anything approaching a tradition for this time of year, it's traveling.

Last year, my family spent the holiday season in Thailand & Cambodia.  We've also rung in the new year in Cairo, Bangalore, Phoenix and the Carribbean.  This year, we may be spending Christmas in New Orleans, but we haven't made the decision quite yet.

I've always enjoyed our family travel, though I know a lot of people can't handle that much family in confined spaces for that long.  I can see that- it is difficult to spend that much time with the only people in the world you feel completely comfortable fighting with and blowing up at!  And I bet, if any of us kids were married, the way our parents so very badly want us to be, that the trips would probably end.  But for several years now, we've been going strong with them, and it's been good times.


My favorite new year abroad (I think we were traveling on Christmas to get there) was definitely Thailand last year.  It was truly magical.  We were in Lampang.  Much of the tour group, about twenty people or so, decided to go to a late dinner at a local restaurant and ring in the new year there.  We had really yummy food and drinks, and just a very nice time chatting and enjoying everyone's company.

It's funny when you travel with people you didn't know previously- you bond so quickly and get along so well while you're together, but when the trip is over, you say goodbye, return to your separate lives and often don't talk much again.  But while the friendship and the trip last- so much fun!

Our dinner ended right around midnight last year (though we weren't quite sure as everyone's watches and all the TV stations seemed to have a different concept of when the new year began).  Looking out over the river the open-air restaurant was situated on, we could see so many fireworks lighting up the sky.  And other things, too, that looked like shooting stars.  But there were so many shooting stars that we began to wonder what the things really were.

Our waiter told us that they were paper lanterns; the Thai write their names and wishes for the next year on these foot-long white paper lanterns, then attach them to a sort of hot-air balloon device before setting them free and watching them lift off into the air.  It was such a beautiful tradition, one that I was completely unaware of.  And just so magical to see.  I have pictures here to share with you, but as my camera doesn't do well in the dark, I don't think they do justice to how absolutely breath-taking the whole experience was. 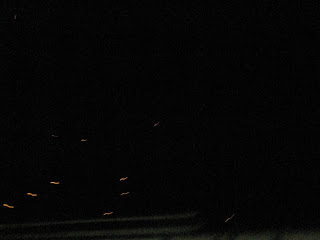 The lanterns lighting up the sky 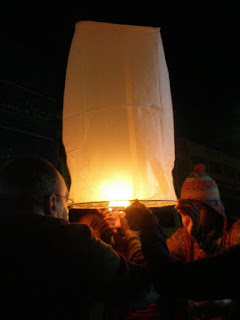 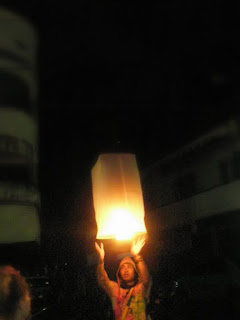 And, so you can get a sense of just how many lanterns there were, and how gorgeous the entire experience was, here are some professional pictures I found on Google for you!  They're not from Lampang, but are taken from a lantern festival held for New Year's in Thailand.  But it was similarly beautiful where I was, too. 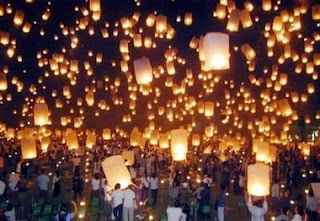 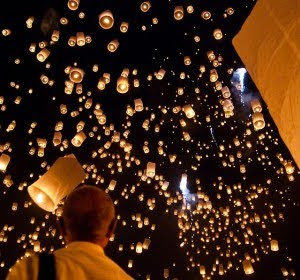 Thanks for including me in the Virtual Advent tour, Marg & Kelly, and thank you to everyone stopping by!  I really enjoyed reminiscing about my trip; here's hoping that 2010 comes in a similarly lovely fashion.

For today's other stops on the blog tour, check out Maree, Lisa & Robin!