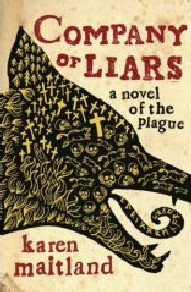 Favorite Line:
"I pity any man who doesn't realize that what he desperately seeks he already possesses."

The year is 1348. The Black Plague grips the country. In a world ruled by faith and fear, nine desperate strangers, brought together by chance, attempt to outrun the certain death that is running inexorably toward them.

Each member of this motley company has a story to tell. From Camelot, the relic-seller who will become the group’s leader, to Cygnus, the one-armed storyteller . . . from the strange, silent child called Narigorm to a painter and his pregnant wife, each has a secret. None is what they seem. And one among them conceals the darkest secret of all—propelling these liars to a destiny they never saw coming.

Well, I don't know if I'd call this a "dazzling reinterpretation" of the Canterbury Tales. I don't even know if I'd call it a reinterpretation. It might have been inspired by Chaucer, but that is probably it. It takes place in Medieval England during the Plague, and it revolves around a group of people traveling together, ostensibly on a pilgrimage. And sometimes they tell stories. That is where the resemblance ends.

I don't know if I really liked this book. The prologue does a very good job of drawing you in, though you have no idea how it fits into the story (well, at least I had no idea- I could be dense) until almost the very end, and then it clicks, which makes the ending pack a pretty powerful (and quite alarming) punch. So the beginning and the end are compelling- what about the middle?

Well, a lot of the characters in this book are hard to like. And they don't get along with each other well, either. So much of the book seems to be bickering and fighting amongst the characters. Each of nine characters has a secret (a Dark Secret, of course) and the book is written so that each of these secrets is revealed and accounted for. Always in a very disquieting manner.

This book wasn't quite what I expected when I picked it up. I expected a book of short stories within a larger, general story. There were some short stories, but not many, and the larger story certainly took precedence over these. It took place in 1348, and there were certainly references to England during the Plague, but it didn't seem very authentic to me. I can't really pinpoint the reason why. It was more of a historical thriller than historical fiction. I could see it being made into a highly successful movie, but I don't know that it will be a successful book.

The characters in this book are both its high point and its low point. As I said above, most of them are hard to like. But one above all, the child Narigorm, is so disquieting and disturbing that Karen Maitland must have a whole depth of talent that wasn't fully showcased in this novel. This girl is haunting and frightening and I hope that Maitland's ability to create a character like that will shine through in her future writing. Though I hope never to run into that sort of person in my life. I also liked the narrator, Camelot, and the swan boy, Cygnus. They were easy to like, particularly Cygnus. The others, I didn't find nearly so memorable.

I enjoyed reading this book, but I think it got bogged down in its characters and how they did not get along with each other. It reminded me a bit of Agatha Christie's novel And Then There Were None. Except longer and set 700 years in the past. I would recommend it to those who like historical mysteries and historical thrillers, but I don't know if fans of straight historical fiction would enjoy it- I don't think the setting was as important for the story as it usually is in good historical fiction.
Musings by Aarti at 12:11 AM