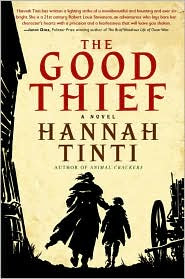 Product Description
Richly imagined, gothically spooky, and replete with the ingenious storytelling ability of a born novelist, The Good Thief introduces one of the most appealing young heroes in contemporary fiction and ratifies Hannah Tinti as one of our most exciting new talents.

Twelve year-old Ren is missing his left hand. How it was lost is a mystery that Ren has been trying to solve for his entire life, as well as who his parents are, and why he was abandoned as an infant at Saint Anthony’s Orphanage for boys. He longs for a family to call his own and is terrified of the day he will be sent alone into the world.

But then a young man named Benjamin Nab appears, claiming to be Ren’s long-lost brother, and his convincing tale of how Ren lost his hand and his parents persuades the monks at the orphanage to release the boy and to give Ren some hope. But is Benjamin really who he says he is? Journeying through a New England of whaling towns and meadowed farmlands, Ren is introduced to a vibrant world of hardscrabble adventure filled with outrageous scam artists, grave robbers, and petty thieves. If he stays, Ren becomes one of them. If he goes, he’s lost once again. As Ren begins to find clues to his hidden parentage he comes to suspect that Benjamin not only holds the key to his future, but to his past as well.

Three reviews in rapid succession! I am pretty pleased with myself :-)

I received this book as part of the Amazon Vine program, which is exciting because I think I also requested it from LibraryThing's Early Reviewers program and the Shelf Awareness newsletter, and didn't get it from either of those. So, third time's a charm, I guess! I'm glad I got it and was able to review it- it was really good!

This is one of those books that causes people to compare the author to other illustrious authors. The two names that show up most on Amazon are Robert Louis Stevenson and Charles Dickens. I've only ever read one Dickens novel, and I've never read Stevenson. The Good Thief takes place in the Victorian era and is a darker, spooky novel. So I can see where the comparison comes from. But the book is much shorter than a Dickens novel, and does not involve personality-changing doctors, both of which I feel are strong points in its favor.

In its simplest form, it's a story about a boy who wants someone to belong to. Tinti creates a web of a novel, with stories that center around half-truths, intriguing characters entering and exiting the fog of the plot (such as a harelipped girl and a dwarf), and threading through all this the question everyone wants to know the answer to: What happened to Ren's hand?

In my opinion, the story wraps up a bit too neatly, and a little too quickly for my liking. I am all for happy endings, but not when they seem somewhat contrived. It's a little hard to review this story since the entirety of it really builds up to the climax and the Great Revelation. I'll just say that I think it's a good story, and it was fun to read, and I will definitely be looking for Hannah Tinti's next novel.

It's the sort of story that begs for a sequel, populated by the entire motley crew that was in this one. The characters and some of the plot devices reminded me a little of those in The Lies of Locke Lamora, another very good book (though far longer and more complicated). I think Tinti's novel is likely to be marketed to a "young adult" crowd of junior high schoolers. That's a very good audience for it, in my opinion- but if you like gothic novels, with dwarfs and giants and orphans and body snatchers... then you won't want to miss this one!
Musings by Aarti at 9:01 PM