According to LibraryThing, How Green Was My Valley entered my TBR pile on December 1st, 2006.  And there it sat until, in one of my bursts of TBR pile guilt, I decided to knock it off my list via audiobook.

The book is about Huw Morgan, who grows up in a rural mining community in Wales.  The story is told from the POV of Huw many years later, as he looks back on all the hardships and drama that impacted the people around him, and his fruitless love for his beautiful sister-in-law.

The story is about a coal mining family in the early 20th century, so obviously it's not a super-happy story.  There are strikes and hard times, lusting after other people's spouses, people leaving for better opportunities, and crazy gossip that people take crazy seriously.  The book felt like a well-written soap opera about the working class.

Llewelyn really fits the Welsh stereotype of being wonderfully musical.  His sentences are like songs, with a rhythm and dance all their own.  I am glad I have this book on my shelves so that I can read it with my eyes one day, not just with my ears. 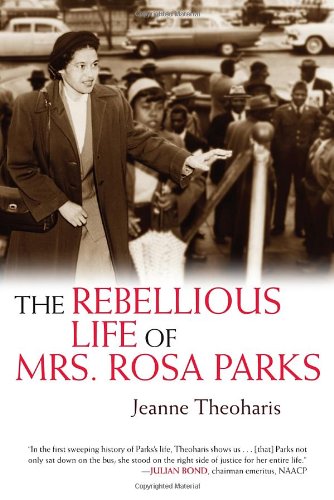 The Rebellious Life of Mrs. Rosa Parks, by Jeanne Theoharis, is one I've had on my Kindle for some months now.  Rosa Parks is a personal hero as well as a national one.  For those who may not know the American Civil Rights movement well, Rosa Parks was the woman "who started it all" by refusing to get up from her seat on a segregated bus in Montgomery, Alabama.  She was used as a symbol to rally around, the impetus for the Montgomery bus boycott that ended in de-segregating the buses, and Martin Luther King, Jr. shot to fame and the Civil Rights movement was underway.

But there was obviously much more to the Civil Rights movement, and there was a great deal more to Rosa Parks, too.  Her refusal to give up her seat on the bus was just one of many acts of defiance - she had been active in the movement for years before and she stayed active for years later; as she said, "It's always amazing to me that people thought it was [startling].  It seems to me it's natural to want to be treated as a human being."  She truly was an amazingly determined woman who "was quiet and sweet, but strong as acid."  (What a fantastic way of describing a person!  I love it!)

I admit this book became a bit repetitive and dry in the later chapters.  Rosa Parks struggled a lot, both in Montgomery and Detroit, and the author spent a lot of time discussing how soul-killing the Civil Rights movement could be, when people thought no change would come in their lifetimes.  But Parks truly was such an inspiring and wonderful person, well deserving of a detailed biography, and I'm so glad to have learned more about her.

JK Rowling/Robert Galbraith's second book in the Cormoran Strike mystery series is called The Silkworm.  This time, Cormoran and Strike are on the case of a missing B-list author whose last unpublished manuscript excoriated many people in the book business.

Between The Cuckoo's Calling and The Silkworm, Rowling has a lot of commentary on the upper echelons of British cultural society.  Most of it isn't very positive, so I wonder how bored she gets at all the publishing galas and dinners that she probably must attend.

This outing is even darker than The Cuckoo's Calling.  The missing author wrote truly bizarre scenes and left chaos in his wake.  Strike's ex-fiancee, Charlotte, is engaged to be married, and he has to come to terms with that and with the tiny jibes that she keeps sending his way.  I admit that, only two books into this series, I am already tired of the whole Strike/Charlotte drama.  It just seems to take up so much of Strike's emotional stores and Charlotte isn't given enough of a personality for us to really care what she does, anyway.  She's just like this succubus, taking time and energy and will away from the story and Strike.

In these two books, I also was annoyed by Robin's relationship with her fiancee.  She's an intelligent, driven, and beautiful woman, and it's hard to believe that she would waste her time on someone who did not value her or treat her well.  Unfortunately, that's pretty much exactly what her fiancee is like.  But through The Silkworm, we get a few hints at what drew her to him in the first place - she says very clearly that she loves him and wants to marry him, and she tells him what she wants to do with her life.  And I appreciated that.  I did not want to be in a story with another beautiful, intelligent woman who just doesn't have the self-esteem to leave the jerk she's with behind.

The relationship I do love in this series is the friendship between Cormoran and Robin.  It continues to develop here, and I look forward to seeing that continue.
Musings by Aarti at 9:02 AM