Musings: In the Garden of Iden 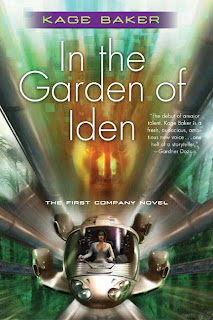 I fell a little bit in love with Kage Baker when I read The Anvil of the World.  But Baker is much more known for her science fiction than for her fantasy (though I admit I am not sure why), and I knew I had to try her time travel series set around a mysterious organization called The Company.  I finally picked up In the Garden of Iden from my shelf recently and delved into the first of the series that revolves around the beautiful and rebellious time traveler Mendoza and her work as an Immortal for The Company.

In this first outing, we meet a very young Mendoza (first name unknown) as she is sold by her mother to a group of witches and then taken to prison during the Spanish Inquisition.  There, she meets a stranger who offers her a way out of life imprisonment and torture- she can become immortal like him.  Obviously, the young child agrees, and she is whisked away to a school in Australia where she undergoes all sorts of surgeries, learns extraordinary details about every era of history, and graduates with a specialty in botany (because she hates people).

On her first assignment, Mendoza is sent to a pleasure garden (The Garden of Iden) in Queen Mary's England.  There she falls in love with a strong-willed Protestant, and her life, as you might imagine, changes quite drastically.

I picked up In the Garden of Iden in the hope that it would be an excellent way to dip my toes into the science fiction genre.  I really want to read more sci-fi, and I figured time travel would be the best way for me to do so.  How awesome would it be to travel through time and witness great historical (and will-be historical) moments?  Or to just see what daily life for normal people is like in different places and in different eras?  And since I loved The Anvil of the World so much, I thought Baker would be the best way for me to start.

However, I don't think this is a typical science fiction book.  Yes, there is time travel, but it only happens once, backwards, to the 16th century.  There are some modern implements that the travelers use, but obviously, they have to fit into the time period, and so anachronisms are a no-no.  This makes complete sense, especially considering how suspicious people were at the time of anything they didn't understand.  BUT... when you are expecting space ships and aliens and teleportation devices, then listening to a universal radio station seems pretty lame.

I also did not expect nearly the amount of religious debate that was present in this book.  I can't imagine the amount of research that Baker did to put the arguments and words and theories into her characters mouths about Catholicism and Protestantism and free will and all the rest.  Mostly because I absolutely skimmed these sections of the book.  I sometimes talk to other people about religion, but not often, and I generally avoid books that have a religious feel to them.  Particularly when the religious debates are used as foreplay.

I did not know before I started reading this book that the romance was so central to the story.  Mendoza, the cynical, damaged and very skeptical young girl with whom we spend so much of the start of the story, becomes a lovestruck teenager who happily describes to us her every physical encounter with her beloved Nicholas.  This got really annoying.  I understand that this is supposed to be a romance that transcends space and time (a la the one in The Shadow of Albion) but, quite frankly, I don't think many romances at all transcend those parameters, and this one didn't convince me.

You can probably tell that I didn't particularly enjoy this book.  I don't think I'll be continuing with The Company series, though I certainly plan to read more of Baker's more traditional fantasy offerings.  And I'm still on the look-out for a quality science fiction author.  Any suggestions?
Musings by Aarti at 7:30 AM