Musings: Bring Up The Bodies 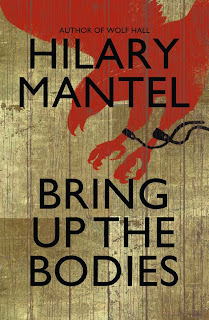 I loved this book.  I have a massive girl crush on her and if I could have a literary dinner with some of my favorite authors, she would be on the invite list.  I love everything I've ever read by Hilary Mantel, I freely admit, and Bring Up the Bodies is no exception.  It's that book I was anticipating receiving so much that I became listless in my reading of anything else while I waited for it to arrive in the mail, knowing that it didn't really matter what I was reading, I would drop it the minute I got my hands on this one.  That's exactly what happened, and the book didn't disappoint.

Bring Up the Bodies is the second book in Hilary Mantel's trilogy about Thomas Cromwell, following on the enormous success of her Booker Prize-winning Wolf Hall.  I loved Wolf Hall, not only because it truly humanized a man who has become more a demonic caricature of himself in the centuries since his life, but also because of Mantel's lyrical writing style.  Bring Up the Bodies is written in the same style (though she clearly has taken note of reader complaints about her use of the pronoun "he" and is much more careful here to make very clear which "he" she is referring to), and I was utterly swept up in it.  It begins, as the cover illustrates, with falconry at Wolf Hall, where King Henry VIII fatefully meets Jane Seymour and sets in motion one of the most dramatic stories in known history.  Once again, we are led by our faithful and highly skilled guide, Thomas Cromwell, through the nooks and crannies, the twists and turns, of Tudor England as Henry VIII turns his affections from Anne Boleyn to Jane Seymour.  The book spans the course of a year, and half of the book takes place over only a few weeks, but this is the climax of Thomas Cromwell's career, the point of no return.  This is when he tests his friends and makes clear his enemies in a way that will set his life on an irreversible track.

This period of history has been written about, staged and televised more times than any of us can contemplate.  We all know how it ends and , and so that makes Mantel's story-telling even more impressive.  Never once was I bored when reading this book; I was always at the edge of my seat, even though I knew, knew all along, exactly how the story would end.  In my review of Wolf Hall, I speculated that in this sequel, we would leave behind the idealistic and kind Thomas Cromwell Mantel revealed to the world and meet the hardened and more ruthless Cromwell that history remembers.  In a way, that is true.  Here, Cromwell is successful.  "But whenever good fortune has called on him, he has been there, planted on the threshold, ready to fling open the door to her timid scratch on the wood."  He is pragmatic.  "It is not so much, who is guilty, as whose guilt is of service to you."  He is vengeful.  "...[this is not about] one year's grudge or two but a fat extract from the book of grief, kept since the cardinal came down."

But he is still also still the tireless, loyal servant to the king who wants what is best for his country.  "His greatest ambition for England is this:  the prince and his commonwealth should be in accord...He wants it to be a household where everybody knows what they have to do, and feels safe doing it."

And so Mantel's skill lies not only in her writing style, which is fluid as a wave that lifts you from the shore of your modern existence to a safe haven of an island where you leave behind everything  about your life and just become completely absorbed into the pages of the novel, but also in her ability to make you sympathize with, empathize with, cheer for and pity Thomas Cromwell through all the terrible, contemptible things he does in this novel.  Perhaps because you know, through it all, how his reign will end, and how fast it will come.  But mostly because Hilary Mantel has gifted us with a Thomas Cromwell that is eloquent, intelligent, loyal and sees the humor in nearly every situation.

Note:  This review is based on an advanced reader's copy.  I received a complimentary copy of this book to review.