Musings: Mrs. Palfrey at the Claremont 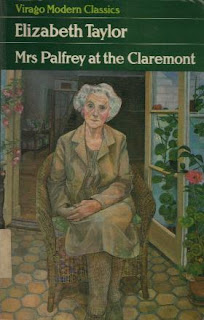 Mrs. Palfrey at the Claremont is the first book I've ever read by the beloved-by-bloggers Elizabeth Taylor.  (No, not that Elizabeth Taylor.)  I can understand why readers adore her so much, but I think my reaction to her is similar to my reaction to Barbara Pym- I loved her for being so thoughtfully honest in her portrayal of people's everyday lives, but the portrayal itself is so painful, bringing to the front all of our tiny cruelties and unkindnesses to each other- that I cannot imagine reading books by Taylor one after the other.

Mrs. Palfrey is an elderly woman with varicose veins who "would have made a distinguished-looking man and, sometimes, wearing evening dress, looked like some famous general in drag."  She moves into the Claremont Hotel in South Kensington.  The Claremonet is open to long-term residents, with the caveat that they "are not allowed to die there."  She keeps company with an assortment of other elderly ladies (and one elderly man who enjoys telling dirty jokes) who like to talk about their extended families and all their familial accomplishments, though they rarely ever receive visitors and live very lonely lives.  Mrs. Palfrey finds herself reinventing her grandson Desmond, making him out to be a very kind and busy young man who is just too busy to visit her as often as he would like.  The real Desmond has never once even written her a letter.

One day, Mrs. Palfrey slips and falls, and a young man named Ludo makes sure she's all right.  Thus begins a rare sort of friendship, of a young man and and elderly lady finding enjoyment in each other's company.  Ludo pretends to be the larger-than-life Desmond that Mrs. Palfrey created, and in return, Mrs. Palfrey provides Ludo with some free meals and the knowledge that someone cares about him.

Going into this book, I thought it would be a really light and fun story about how the young and old can learn from each other.  But this is not at all what Elizabeth Taylor really projects.  In many ways, this book reminded me of one of my all-time favorite novels, Wish Her Safe at Home.  I couldn't bring myself to fully trust Ludo, and I had suspicions about the friendship and the way he treated Mrs. Palfrey.

In what seems to be a recurring theme in books set in London, I was quite struck by the loneliness and isolation not just of Mrs. Palfrey but also of Ludo.  He goes to the laundromat just so that he can have a conversation.  He starts a relationship just so that he has someone to keep him company in the evenings, though it's quite clear she is not in the least bit interested in him.  His relationship with his mother is strained and he doesn't really have any friends.  In many ways, his circumstances are no different than Mrs. Palfrey's, who is also looking for human interaction and is estranged from her family.

What makes the two different is that Mrs. Palfrey- and all the other Claremont residents- is constantly reminded of her age.  "I must not wish my life away, she told herself; but she knew that, as she got older, she looked at her watch more often, and that it was always earlier than she had thought it would be.  When she was young, it had always been later."  Another resident at the Claremont says, "'As one gets older, life becomes all take and no give.  One relies on other people for the treats and things.  It's like being an infant again...Being taken out, I mean, as if one were a schoolchild.'  She thought bitterly of sitting there, waiting for someone to turn up, out of the kindness of their heart.  Will they come?  Or won't they, and so make oneself a fool?"  After someone repeatedly calls him "sir" in a conversation, Mr. Osmond marvels that "when one's old, no one calls you by your Christian name.  You might as well not have it."

This isolation and constant awareness of the passage of time are themes that came up in The Water Room, too.  I think one of the fears I have in life is that of growing old alone, with no one around who deems me worthy of conversation or realizes that even as my body ages, my mind is still sharp and witty and worthy of attention.

What also really stood out in this novel is just how callous people can be to others.  It was heart-breaking to read scenes of the older women dressed up and waiting for people to come visit them who somehow forgot to show up.  It was sad to read Mrs. Palfrey say that she no longer has any reason to go grocery shopping because she doesn't entertain any more and has no reason to buy things like cheese or chocolates.  It was painful to see that so many of the Claremont's residents chose to live in London to be close to everything, only to realize that they physically were not capable of going out to explore the city on their own, and there was no one around to offer to take them anywhere.

This book was very sad to read, but it's one of those sad books that you just want to hug close to you in the hopes that the warmth of your hug will seep through to the characters that live within its pages.  Taylor writes with so much tenderness and empathy that you are unlikely to get this book out of your head for a long time after you close the back cover.
Musings by Aarti at 7:30 AM