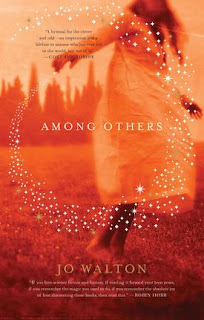 Jo Walton is an author I've wanted to read for quite some time.  I particularly want to read her Tooth and Claw, but Among Others was the only book by her available in the library, so I went for that one instead.  A quick search on Google tells me that there are seventy instances of this book being mentioned in my "personal network," which means that many of you have already read the book or mentioned it somewhere or other.  I must have forgotten all of those reviews, as I didn't really have any idea what to expect when going into this book.

Among Others is not an action novel.  In fact, there is very little movement at all in the book- the narrator, Morwenna, spends most of her time reading in corners of rooms and trains.  Sometimes she walks to a bus stop.  Morwenna, or Mor, as she calls herself, was injured when she was hit by a car.  Her twin sister, Morganna, was killed in the same accident.  As the story unfolds, we get small hints as to what exactly happened. Mor and her sister had to take a stand against their mother.  Morwenna came out permanently scarred, and Morganna didn't come out at all.

Now, Mor lives with her father and is sent to boarding school, where she feels so left out and lonely that her only real friends are books- science fiction books, in particular.  And we follow her there and witness her desperate attempts to keep away from her mother, her suspicions about her father's family, and her yearning desire to have a group of friends that understand her.

When I reviewed Diary of a Provincial Lady, I wrote out a list of all the books mentioned in the Provincial Lady's diary.  Among Others is also written in diary format, but it mentions so many books that I can't even begin to compile a list.  And, really, the books are mentioned in a way that immediately makes you want to put every science fiction and fantasy book ever written on your wish list.  Mor doesn't just read- she really gets what she reads and has a lot of Deep Thoughts about it.  So when she mentions Lord of the Rings, she doesn't mention it in passing as a "really great book" or anything like that.  She clearly has a deep and abiding passion for Lord of the Rings.  It's the book she uses to escape from her own world, and to draw connections between an author who lived through so much and imagined so much and herself.  She says once, "When I grow up I would like to write something that someone could read sitting on a bench on a day that isn't all that warm and they could sit reading it and totally forget where they were or what time it was so that they were more inside the book than inside their own head."

In some ways, I was overwhelmed by Mor's detailed description of pretty much every single book she read over the course of six months (which was a lot of books), plus many others she had read before.  She mentions so many books and authors, describes large themes and the methods in which different authors tackled them.  She talks about characters and settings and science and history, and it's all amazing and lucid and candid that it's hard to take in sometimes.  Really, in many ways, this novel is Jo Walton's homage to the science fiction books that formed her life, rather than a novel in the strictest sense.

But that is not fair to the book.  Among Others deals with teenage angst in a way that is very refreshing and imminently readable.  Mor has gone through much more than her classmates in her life, yes, with an insane mother and a dead twin and moving from Wales to England.  But she still wants the same things- she wants friends, she wants to be accepted for who she is, she wants someone with whom to share some secret moments.  She really is a typical teenager in some ways.  Except she's not.

One of the most interestingly ambiguous aspects of this book is Mor's belief in magic and fairies.  It's hard, as a reader, to get a real handle on whether the magic is real or just in Mor's head.  This is made even harder by Mor pointing out that there is always a way to disprove magic and chalk things up to coincidence or to set out a line of why things happened when, without magic.  But that doesn't mean that magic isn't there.  In some ways, this makes Mor an unreliable narrator.  But it's impossible not to trust Mor because she herself believes so completely in the magic occurring around her.  It's just the skeptical readers who aren't sure what to think.  I really loved the subtlety of this because the argument could go either way.  Is Mor imagining certain situations and nuances that aren't there?  Or is she the only one who notices what's really going on?

I think the only part of this book that really disappointed me was the ending.  It seems fairly obvious that at some point, Mor will have to confront her mother again, but this is done so randomly that I couldn't really take it seriously.  I didn't feel the same fear as Mor did for her mom, and so the climax didn't cause me to catch my breath as much as I expected.  That said, though, the climax works from both an "I believe in magic" and a "Mor is just an adolescent who is starting to see herself as her own person" perspective, which I really appreciated.

One of my favorite lines of the book is this one, when she sees the ghost of her dead sister:


Nobody could tell the difference between us, but of course we always were different.  Since she's been dead, I'd almost forgotten, or not forgotten, but not thought about her as her distinct self so much, more about the two of us together.  I'd felt as if I'd been torn in half, but really it wasn't that, it was that she had been taken away.  I didn't own her, and there were always differences, always, she was her own person and I'd known that when she was alive, but that had blurred in all the time since when she hadn't been there to defend her own rights.

I love this- it really describes perfectly what happens when a person close to us passes away and is only alive still in our (very biased, very personal) memories.  It's no longer that person, but your memory of that person, that lives on.

The language of this book was so lovely, and the narrator so engaging, that I really just fell in love with Mor.  She's such a precocious teenager, and more than anything, she made me want to dive right into the science fiction genre and read all of her favorite books.  I am so excited to read more by Jo Walton!
Musings by Aarti at 7:00 AM