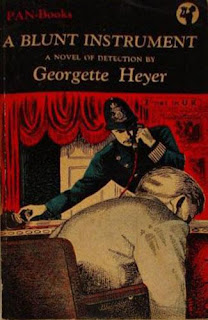 It is not often that I say this for a Georgette Heyer book, but A Blunt Instrument struck me (excuse the pun) as incredibly "meh."  I think it's highly unfortunate for me that one of the first Heyer mysteries I read was Footsteps in the Dark, which is one of the most hilarious novels I've ever read, and so every time I pick up another one of her books, I hope against hope that it turns into Footsteps in the Dark.  And sadly, it never does.  A Blunt Instrument, for some, may get close.  There is a very bizarre police officer who quotes cryptic, doomsday proverbs from the Bible at every turn.  There's an heir to a vast fortune who claims not to care about anything or anyone, but just wants to live his life in the generally selfish manner he chooses.  There's a mystery authoress who, for reasons I couldn't quite discern, chooses to wear a monocle.  There's a Misunderstanding Between a Couple that is in the Midst of a Great Divide.  But it just didn't work for me.

This novel centers around the murder (by a blunt instrument no one can find at the scene of the crime) of a prominent and wealthy womanizer in his own study.  It turns out the gentleman was not quite so savory, had many affairs, acted unethically in the stock market, and held other people's debts over their heads.  So really, any number of people may have wanted to kill him, though at first it seems like no one ever would.

In many ways, I save Heyer's novels for when I don't know what else to read because I trust her so much.  She is so witty and frothy and so many of her characters are just a lot of fun.  But increasingly, as I am separated by years from her romances and am living more amongst her mysteries, I find her difficult to like as a voice behind the writing.  Most Heyer fans know that Heyer was not a very nice person- she was not kind, she mocked her fans, and she was (as you can tell within about two minutes of reading one of her books) very, very class-conscious.  She also indulged quite a bit in stereotype, and that is present very much in this novel.  There's a Jewish stockbroker character, Mr. Budd, described as "a short, fat man with a certain oiliness of skin, and an air of open affability that was almost oppressive."  He later on makes "a gesture of the hands which betrayed his race." (What hand gesture betrays a person's race?  I do not understand this at all.)  And it comes out later that he was cheating his client.  I'm not saying that only Gentiles are villains or anything of the sort, but in reading many Heyer novels over the course of several years, this sort of total prejudice really begins to bother me.  And what makes me shiver so much, too, is that the book was originally written in 1938, so it's easy to see just how much pain and heartache and horror those stereotypes will cause in the future.  And yes, I know that Heyer was a product of her time, etc., etc., but it can just be very hard to deal with sometimes.


It's this that makes me think her historical romances will last much longer than her mysteries will.  The mysteries, I think, will become dated very quickly.  It's easy to forgive prejudice and classism from 200 years on, but not quite so easy to stomach in people who lived through two world wars but maintained their sense of superiority.  I'm getting tired of all these Gilded Age playboys who think they're so wonderful just because they're rich, even though they do nothing with their time and are bored of life.  I'm sick of the women who refuse to think deeply about anything, but just wait for a man to think for them, and then laugh falsely and decide that their lives are grand because they can go ride around in Bentleys for the rest of their empty lives.  It is so wearing, and I can't help but woner sometimes if Heyer wrote about the upper crust so damningly in some ways because she herself couldn't believe the ways in which they acted.

The humorous aspect of this book was also lost on me.  There is a police officer, Glass, who goes around speaking bizarre prophesies at everyone.  This was maybe funny the first few times, but Glass was in the book far too much and said such things all the time, and I got completely sick of it.  I am extremely uncomfortable with anyone being so open and doomsday-ish with their religious leanings, and this was no exception.

So clearly... this was not my favorite Heyer novel.  I still love her as an author, though I'm beginning to take her down from the pedestal and see that much as I love some of her novels, and her characters, and her wit and humor, I don't think I much like her as a person and, if the people who populate her mystery novels are the people she spent time with, I don't think I'd want to be her friend.
Musings by Aarti at 7:30 AM