A and Z March through the Middle: Middlemarch Part III 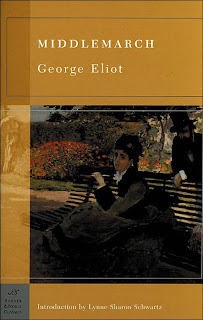 You probably thought we gave up on this read, didn't you?  Bot no!  Zibilee and I are back with a vengeance here, discussing Book III of George Eliot's epic novel Middlemarch.  For those of you who may not know, the lovely and fabulous and eloquent Zibilee and I are reading George Eliot's Middlemarch together over the next several weeks in a fairly meandering and highly unscheduled manner.  Basically, our plan is to read one book (there are eight books that comprise the novel) and then discuss it and analyze it into submission so that our weary modern minds can understand it :-)

The first half of our Part III discussion is here, and the second half is at Zibilee's blog, Raging Bibliomania.  We chat about debts (mainly those of one particularly well-meaning but bumbling young man) and social cluelessness (also in the character of a well-meaning but bumbling young man) below, and at Heather's, we talk about death (particularly of an older, unkind gentleman) and jealousy (of the May-December marriage variety).  Hope you'll check out both the entries and share your thoughts with us!


Aarti:  I tend to have difficulty sympathizing with people who get themselves into large debts due to completely selfish behavior, and so it was hard for me to read about Fred’s plight with anything but skepticism.  And then his hope of getting out of debt by selling a horse at a profit when he is a horrible judge of horses (and everything else, it seems)?  It was hard for me to read, and I can completely understand Mr. Garth saying that Fred is not to be trusted.  I don’t trust him, either.  He just seems to think everything will work out in his favor, and then when it doesn’t, he is all, “Oh, woe is me, I don’t deserve your love but I hope you will give it to me, anyway.”  Honestly!  I felt so horrible for the Garth family.  I can’t even imagine how Caleb felt, having to go to his own daughter and ask for money.  And the apprenticeship they had to give up, too.  It seems like Fred is just taking everyone down with him, and I hope he shapes up soon.

Heather:  I agree, Fred’s selfishness during this part of the book made me cringe. I don’t know how he could come up with the scheme for the horse, when that seems like it wouldn’t work by a longshot. Fred just doesn’t take ownership of his flaws, and going around town begging for money just makes me look down on him. I also don’t have a lot of patience for people who get themselves in this kind of trouble, due to their own negligence. I also felt really bad for the Garth family, and they could ill-afford to lose money, when they had so little themselves. Fred has such gall to even ask for the money in the first place, and then to have lost it, and not be able to repay it was such a horrible thing for the Garths. The fact that Caleb had to borrow money from his daughter must have been humiliating for him, but Fred doesn’t even see that! How angry this made me! Also, now they have lost the ability to apprentice their son, so this means more financial struggle for them in the future, all due to Fred’s stupid speculating. I felt really bad for Mrs. Garth having to do that.

Aarti:  I also think Lydgate’s method of dealing with Fred’s illness is likely to pay negative dividends in the future.  Lydgate in many ways thinks he’s above petty politics and infighting, but I think this is really going to hurt him in the future.  He may practice medicine in an ideal and pure sense, but he still needs to deal with the consequences of his actions- not only in the way he is antagonizing every other doctor in town, but also in the way he keeps thinking that he is lightly flirting with Rosamund when she is viewing it completely differently.  I can’t imagine that anyone would think that life with Rosamund would be happy- she seems a completely self-centered shrew to me.  And then, of course, Lydgate seems to be entering into the marriage solely because he thinks she is really pretty and sweet, but doesn’t seem to know her that well at all, really.

Heather:  Lydgate really doesn’t have the history of the town, or know the players well enough to do what he is attempting to do. He wants to be uninvolved with what’s going on, but he really is getting into the thick of it without realizing it. He is setting himself up for a big fall by antagonizing the other doctors and by trying to be holier-than- thou. He just isn’t the most observant guy, both professionally, or socially. I couldn’t believe that he would think that Rosamund wouldn't make more of the flirting he was doing, but he seemed so surprised. He reminds me of a bumbling professor, who is so interested in his work that he neglects to see the feelings of others, and has no idea of how he comes off to others. I think he was rather surprised to find that Rosamund felt so strongly about him, and it seemed like he bumbled his way right into an engagement. I also don’t like Rosamund. She is very self-involved, and it seems like she thinks she is better than everyone else. I am not sure about other women, but when I was planning my wedding after my engagement, I wasn’t thinking of how my status would change, and how my possessions would increase, which seems to occupy a lot of her thoughts. It’s like her marriage is a means to an end, and that end is her being more influential and rich. I agree that Lydgate doesn’t see her for who she really is.
Musings by Aarti at 7:00 AM