Musings: On the Origin of Tepees 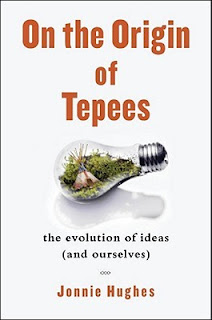 I first heard about Jonnie Hughes' On the Origin of Tepees:  The Evolution of Ideas (and Ourselves) on NPR - either on Radiolab or Science Friday, I can't remember which one.  I was so taken with the name, and then, when I looked the book up online, I was even more enamored with the cover image that the book went immediately onto my wish list.  And there it sat, unassuming, until I realized recently that I have access to a university library system and that I could check the book out and read it very easily!  So, thanks again, University of Michigan Library!

On the Origin of Tepees is a science book written by an ecologist, but I really hope you don't let that scare you away.  I know that already, some of your eyes are glazed over and that you're just going to skim the rest of this post and write something like, "Sounds interesting, but not for me" in the comments, but that is NOT what you should do.  There are some books that make you smarter in an everyday sense- ones that really make you think critically about the way the world forms and why things are the way they are, and this is one of those books.  After reading this book, you'll a) want to take a road trip to the Black Hills; b) add "construct a tepee" to your bucket list; and c) look at barns in a totally different way than ever before.

This book is about ideas:  how they come about, how they change, why some stick around and some are forgotten forever, and how they impact us as individuals and as groups.  And Hughes argues that people don't have ideas... ideas have people.  He argues his point on a road trip from Minneapolis' Mall of America through Yellowstone National Park to the Black Hills and then up into Canada, giving readers details on the evolution of the cowboy hat, the American barn, tepees (of course!), the wheel and jokes.  Just as species are locked in a battle for survival over generations and millennia, so too are ideas.  They want to live long lives, too, and when two ideas come into conflict with each other, then it's often the case that only one can "survive."

Hughes expands on this theory and applies it in a myriad of ways.  Most of them are very believable, though I admit I don't really like the way he uses this theory to explain the fall of Native American culture:


The species of Ideas from the Old World...had evolved in the noosphere's most competitive arena:  Western civilization.  They'd had a harder Life, competed with more rivals, moved through a larger pool of mind habitats.  The rules of natural selection would suggest that these more complex species were destined to replace the endemics and that, because of the degree of the imbalance, they would do so at a breathtaking speed...When New World Ideas came into direct competition with the Old World species - the languages, the religions, the tepees - they just couldn't cope.

This is difficult for me to swallow for many reasons.  One, if ideas go through an evolutionary "survival of the fittest" test, then why would Western Civilization, the "most competitive arena" still have multiple religions, languages, dress codes and cultures, rather than just one?  If it's the case that competing ideas can co-exist in such a small space as Europe together, then it seems unlikely that the same would not hold true in America.  Two, it seems like Hughes assumes that Native Americans lived in isolation and never challenged each other's ideas, assumptions, or beliefs.  I don't know that much about this period of history and the cultures that thrived at the time, but I think this is a huge assumption.  If pre-Columbian population estimates are accurate, then America was home to a large population of people that would encounter and challenge each other regularly- I don't see, then, how European ideas would triumph so easily over American ones.

That was the only real blip in my reading, though.  Hughes admits that "We may all have the power to participate mindfully in cultural evolution, but there isn't much in history to claim that we do so with any regularity or skill.  We are far too passive in our role.  Just as we would rather learn a solution than devise one, we too readily accept the culture we receive, and too rarely question it."  And this, too, he explains using science.  Our imaginations aren't equipped to make huge leaps that require conjecture; we're much better at taking small steps and getting there incrementally.  But we can be so set in our own ways that we don't ever consider that maybe a different way is better- and that, tragically, is what happened in America.

It's a very hard lesson to hear and an even more difficult lesson to learn- especially when you consider that even if you learn the lesson, you must keep the idea alive by passing it on to someone else, and hoping that somehow, the lesson will catch on and everyone will just know it.  It's a huge task.

Hughes put other things in perspective for me, too.  It's easy to think of Native American culture as static.  They were here before the Europeans came, for eons, living the same life they had always led, until they were wiped out by a combination of disease and genocide.  But that's not the story at all.  It's unfair and narrow-minded to think that Indian culture was stagnant and unchanging.  The culture and the people and the technology were all dynamic, and all subject to the pressures of the environment even before Europeans arrived.  It was so interesting to read about what brought Indians over to North America, and what brought them further and further south, and how they adapted their lives to the changing environment.  It was important for me to understand that.

This was an excellent book that really made me think deeply about the world around me and how it came to be as it is.  I understand evolution much better now, and am truly impressed by how the concept can apply not only to biological species, but to ideas, too.  I didn't agree with everything in here, but every page made me feel more invested in how I help to shape the environment around me.
Musings by Aarti at 7:00 AM