Musings: The Tales of Beedle the Bard 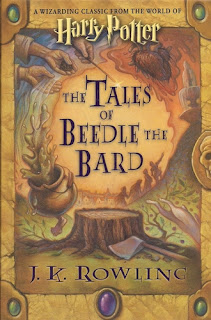 I haven't had a Harry Potter fix in quite some time!  I saw The Tales of Beedle the Bard in the library and immediately sighed with reminiscing about the glory of the Harry Potter series and quickly picked it up.  I devoured it over the course of little more than an hour, and am now once again left without a truly engaging, humorous and imaginative fantasy series to read.  Does anyone have any suggestions for other series similar to Harry Potter that I should look into?

The first thing I realized when I opened The Tales of Beedle the Bard was that it has been a very long time since I've read a Harry Potter book.  And I miss them.  I don't know that another series has appealed to me as fully as this one has, except for Megan Whalen Turner's Attolia series (which, in my opinion, should get much more attention than it does), and part of the reason Harry Potter appealed to me so much was because it truly was a generational experience.  Really everyone who was around the early 2000s knows about Harry Potter and how we all waited with bated breath for each subsequent book or movie.  And I miss that collective excitement and wonder and discussion.

Based on that, I am not surprised that I found The Tales of Beedle the Bard woefully inadequate.  But let me explain.  The stories themselves were very engaging and interesting.  Professor Dumbeldore's notes and details and explanations were truly excellent.  J. K. Rowling's forward was great, too.  But there were only five stories and I can't help but think that Beedle the Bard must have had more in him and is just holding out on us all.  I wanted more!

One of the things about Trickster that frustrated me was that most of the stories included there showed women as passive objects.  So I was thrilled to open Beedle the Bard and see, right in Rowling's forward, that "Beedle's witches are much more active in seeking their fortunes than our fairy-tale heroines...[they] are all witches who take their fates into their own hands, rather than taking a prolonged nap or waiting for someone to return a lost shoe."  I loved Rowling for her creation of the fantastically geeky and wonderfully loyal Hermione Granger, and my literary girl crush continues with her determination here to show women in leading roles and choosing their own destinies.

I also really loved the stories.  I love folk tales of any sort, and Rowling created five that fit the mood, feel and general characteristics of these oral traditions that pass down generation to generation through the whole world.  I thought Rowling had great literary pitch in the narration of the stories, and I just wish there were more of them.

I also loved Dumbledore's commentary and the way he used the tales to make points about how people attempt to wash over historical fact, limit people's access to knowledge, and persist in ideologies of bigotry based on fear.  The stories really took on a whole new context once I read Dumbledore's notes, and I am glad that Rowling chose to include them in this small collection.

Really enjoyed this small book's ability to transport me back to to the world of Harry Potter.  I just wish that Beedle had written more tales for all of us to enjoy.
Musings by Aarti at 12:00 AM