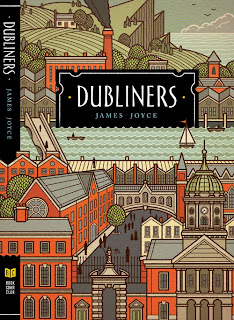 Oh, James Joyce!  I have avoided him since high school, when I read The Portrait of the Artist as a Young Man and analyzed the pants off that book's epic amounts of symbolism.  Also because Ulysses seems to me just a study in extremism and does not appeal to me in the least.

But Dubliners.  It's a collection of short stories, and they are set, as you might imagine, in Dublin.  I went to Dublin in late February and just couldn't resist the temptation to be in Dublin, reading Dubliners by one of Ireland's most famed authors, James Joyce.  So I succumbed.

And I'm very glad I did.  I didn't enjoy all the stories in this book.  In fact, I enjoyed very few of them.  But the last story, "The Dead," is so brilliantly amazing that it made up for all my lukewarm feelings towards the rest.

Joyce wrote this book in the early 20th century- it was first published in 1914- right in the midst of the great (and ultimately successful) move for Irish independence.  This part I remember well from The Portrait of the Artist as a Young Man, which had all sorts of references to Irish independence in it.  The stories in this collection are centered firmly on the working class and middle class people that make Dublin work and give it so much of its personality.

As this is James Joyce, symbolism abounds.  I missed much of it.  For example, the narrators of the stories grow older as you get further into the collection (though this is not true for the version I read as it included "The Dead."  That story was not included in the original collection).  Each story's main character has an epiphany, too, wherein he or she gains some sort of inner understanding. 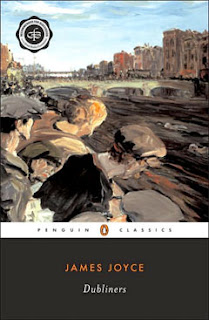 There were some stories that I loved - "Eveline," about a young woman who is in love with a very kind sailor but feels guilty about leaving her drunken father on his own; "A Painful Case," about a man who becomes close friends with an older woman, then cuts ties with her, only to find out later that he left her to a life of loneliness and regret; and, of course, "The Dead," about a man who realizes how much he loves his wife one evening, only to find out that she spent the evening thinking about a long-lost love.  I truly appreciated Joyce's narrative style.  He wrote in the language that his characters would use.  While this often made it difficult for me to understand the context and the meanings behind some words, it also made the characters feel much more vivid and the stories that much more real.  I also loved reading the names of different neighborhoods or streets and thinking, "I was just there!  I know where this character is!"

But there was also just such a sense of cynicism throughout this story collection.  The characters seem so stuck in their lives, and many of them are so unhappy it is palpable.  In one story, the character takes out his rage about his life in alcoholism and abuse towards his son.  In another, the character realizes, while sitting alone in a small restaurant eating mushy peas for lunch (quite possibly one of the saddest mental pictures I will ever have in my mind), that he has done very little with his 31 years on Earth, and is unlikely to do anything very great with the rest of the time he has.  These are people who have accepted their lots in life, but are desperately lonely and constricted by them.  In many ways, those feelings seem so relevant to our world today, with so many people unemployed or underemployed.  Particularly in Ireland, where the unemployment rate is so high, I could see the frustration and fear that so many of these characters felt is also present in their descendants today.

In some ways, I wish I had read a lighter and more peppy set of stories while in Ireland (I had a copy of William Butler Yeats' Irish folk tales, for example).  But by reading Dubliners, I think I got the gritty reality behind the marketing of shamrocks, Guinness, beautiful green rolling hills and dramatic seaside cliffs.  I think these are stories that I would love to come back and read when I am less distracted and more able to appreciate the symbolism behind them.  And I think "The Dead" is a story that may stay with me for a long time because of just how evocative and beautiful it is.