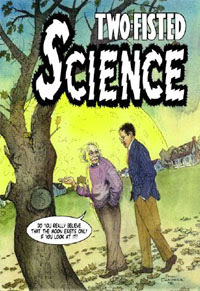 Two-Fisted Science and Dignifying Science:  Stories About Women Scientists are two graphic novels about various scientists that have contributed to history but often are overlooked.  It is written by Jim Ottaviani and illustrated by many different artists (Dignifying Science entirely by female artists).  I say it's about overlooked scientists, but this isn't entirely true- Two-Fisted Science features Galileo and Newton, too.  I found both books in the undergraduate library at the University of Michigan, but they are clearly written for a much younger audience, probably middle grade kids.

I really like these books in concept, particularly Dignifying Science, which I'll get to in more detail soon.  Jim Ottaviani writes many graphic novels, all about science and scientists, and I think he is awesome for that, particularly as he writes them for a younger audience.  So now, in between reading about Superman and X-Men, kids can read about Richard Feynman, Rosalind Franklin and many others.

I also like that Ottaviani writes about some scientists that don't get much attention (at least, I didn't know who they all were), and that he writes about them in a way that is accessible and humanizing.  We don't get epic life stories and biographies in these books, we get brief snippets of people's lives and how those people helped contribute to science.

Except that, many times, those snippets are very unclear and the link between the snippet and the scientist's contribution to science is not obvious.  For example, in Two-Fisted Science, there is a random story about Isaac Newton and Gottfried Liebniz meeting in a bar and getting into a huge fight about calculus.  That's all.  We were given no context about the point of contention, how the argument was resolved or what they were even arguing about.  Also, the authors tell us later that it's unlikely the two mathematicians really ever met in a bar, though they did hate each other.  But never why.

Another story is about Bertrand Russell and his theory of cosmology, but I had no idea what was going on in the story, nor did I know any of the people Russell was talking to.  Were they other scientists?  Just random standers-by?  Friends?  Family?  Also, there was a story on Werner Heisenberger and heavy water.  What is heavy water?!  We get no context at all, and it gets very aggravating very quickly.  Ottaviani includes a lot of notes and references and suggestions for further reading at the back of the book, but I'd prefer to have more substance in the stories themselves.

Only Richard Feynman had a long enough story to imbue depth and personality to the characters that populated it.  And that story was really, really good!  I didn't know anything about Feynman before reading Two-Fisted Science, but the man was amazing!  And for an atomic scientist involved in the Manhattan Project, he had quite a sense of humor as well.  And a beautifully tragic love story.  Clearly, Ottaviani has a soft spot for Feynman, and he gave him so much care and attention.  I wish he had done the same for everyone he profiled instead of giving us the jolting and unsatisfying vignettes he chose to share. 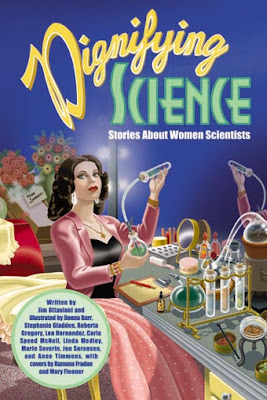 After reading Two-Fisted Science, I was nervous about Dignifying Science (particularly based on the cover), but the premise was just TOO GOOD to pass up.  I cannot tell you how my heartbeat sped up when I saw a graphic novel about women scientists.  I immediately snatched it up.  I was weirdly disappointed, though, that the book was even on the shelf.  Why aren't other people checking out a book that has "Stories about Women Scientists" in the title?!  It should have a wait list ten people long!  What an utter travesty.

Dignifying Science has the same problems that Two-Fisted Science does.  There is just no context or explanation at all, and I was utterly bewildered again.  However, this was all worthwhile because I learned about Hedy Lamarr.

Hedy Lamarr was born Hedwig Kiesler in Austria and quickly became a breathtakingly beautiful woman.  She began acting in films, most notoriously the film Ecstasy, which featured just the sort of scene that you are imagining.  Pretty racy for the silent film era!  Lamarr married an older, very controlling man and spent years in an unhappy marriage until she managed to escape by impersonating her maid, hightailing it to London and obtaining a divorce.  She had another successful movie career in the US and on the side, made serious contributions to science, particularly in relation to using radio frequencies to send military messages.  I'd give you more details, but there were not nearly enough in this book!  She sounds like an entirely remarkable woman who was turned into a sex object.  The end of her story in the book has her making a wry, resigned face when she says she wants to help the war effort with her radio technology idea, but instead is sent to the front to kiss soldiers and boost morale. 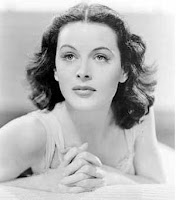 I'll be sure to write up a Hedy Lamarr feature on my intermittent interlude series at some point in the future.

So while I didn't love these books and found them extremely disappointing on most levels, I am glad that they introduced me to Richard Feynman and Hedy Lamarr, two people that deserve a lot of attention.
Musings by Aarti at 11:30 PM