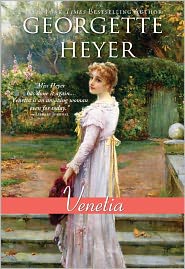 Venetia, by Georgette Heyer, is one of her most romantic books (in my opinion).  It's about beautiful, fun and kind Venetia Lanyon, a 25-year-old woman who has never been far from her beloved Yorkshire home and has led a very sheltered existence.  One day, she meets her new neighbor, Lord Dameral, whose life has been as scandalous and talked-about as Venetia's has been virtuous and sheltered.  The two have an instant attraction to each other, and before long, become the very best of friends.  This blossoms into more than friendship, but there is such a gulf between their life experiences and and so much trouble with Venetia's two brothers and their lives, that Dameral feels certain they'd never be happy together, and that Venetia should be with someone else.  Venetia, though, is quite certain of herself, and sets upon a path to ensure that her happiness is secured.

I am not sure when I last read Venetia, but I do know that it did not rank amongst my favorite books by Heyer.  In rereading it, I have a new appreciation of Venetia herself, but I still don't rank the book amongst my favorite Heyers.  There are a lot of long paragraphs describing people's emotions and their reasons for acting or thinking as they do, and a significant amount of introspection and detail.  There are also some characters who actually caused me pain to have to spend so much time with, and I wish their roles had been severely lessened or abridged in some manner.  Both Venetia's suitors were caricatures- one a moody, Byron-esque boy of 20, and the other a very prosy and lecturing, "worthy" gentleman.  While they were certainly amusing to poke fun at, I tired of spending so much time with them (and marveled at Venetia's ability to do so without tearing her hair out).  There was also a very cruel and domineering woman in the story, Venetia's brother's mother-in-law, who was just horrible.  She wasn't kind to anyone at all and seemed to have no positive traits and the entire section in which she was in the book, I was on edge and stressed by the tension she caused.  Very good writing by Heyer to bring these characters to life, but they certainly aren't people I wanted to spend any more time with.

In that way, I think this book in many ways resembled Heyer's mystery novels more than her historical romance ones.  She has many people in fairly cramped quarters, and quite often they do not like each other.  There are hints of infidelity, a man with a very colorful past, and a lot of family drama.  There are a lot of biting remarks, and the two main characters are actually refreshingly open about their attraction to one another and their desires to act on that attraction, which is not something you often see in a traditional Regency romance.  And the two main characters are fantastic.  Dameral, in all his swarthy self-hatred that can dissolve into shouts of laughter, is a great spin on the whole idea of a "reformed rake," a man whose reputation blackened him before he had done anything so very bad himself, and then decided to go about at least earning his reputation.

But really, my favorite thing about this story was Venetia herself.  In a genre full of stories about girls being objects that are acted upon- men fall in love with them, men seduce them, men cheat on them, men whisk them away, men marry them, men make them happy- Venetia stands out as a woman who acts for herself.  She decides to stay at home with her brother, she decides that she wants to marry Dameral and she finds a way to do it, no matter what other people may think or say.  She does so at considerable risk to her reputation and her feelings, and I couldn't help cheering for her the whole way through.  She's wonderful.  Venetia is so honest and open about everything- she sees and accepts people's faults, but doesn't ever want to change them.  She spends her life sacrificing for other people, but then when she sees that happiness is within her grasp, she reaches for it and doesn't give up.

The things she does to secure her own happiness, no matter how many people tell her it's wrong and she'll be ruined, are just amazing.  She is so confident in knowing what is best for her, and in fighting for her own happiness (propriety be damned), and is exactly the sort of Heyer-oine I most enjoy.

Note:  I received this book for free to review.
Musings by Aarti at 8:34 PM