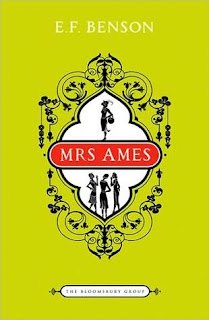 Mrs. Ames, by E.F. Benson, is one of the newer offerings from the Bloomsbury Group.  It centers on the small English town of Riseborough, where Mrs. Ames reigns supreme as the queen of social activity.  But all is not well in her world.  Mrs. Evans, a younger, prettier and more charming hostess has recently moved to town with her doctor husband.  She catches the eye not only of Mrs. Ames's poetry-leaning atheist son, but also that of her bumbling and self-satisfied husband.  Mrs. Ames realizes that to win back her man, she must undertake extreme measures of beautification.  But will those be enough?

I really enjoy books about small-town life at the turn of the century.  I love reading about the evolving class structure, the encroachment of new technologies and the slow evolution of domestic arrangements.  This book really hits on all that and more.  It's full of very sharp satire (razor-sharp, at many points) about people and their fascination with neighbors and scandal.  There were many points when I laughed out loud or gasped at the author's wit and ability to understand exactly what was going through people's minds and bring it to light so perfectly.  When I started this book, I didn't think I would enjoy it nearly as much as I did.  That is, I knew I'd like it, but not so much.

What I liked about this book more than anything else was its frank and ultimately very empathetic portrayal of a group of women reaching late middle age and finding that their lives are not at all what they thought they'd be.  Mrs. Ames and Mrs. Evans are both unhappy in their marriages.  It isn't that they don't appreciate their husbands- they do have a general sort of fondness for them.  But their lives have become so routine and ordinary that they take everything for granted and people take them for granted, too.  Every day is much like the one that came before it and very likely to be exactly the same as the one that comes next.  As Millie Evans thinks early in the book,


Then suddenly it struck her that all this was hardly worthwhile.  It seemed a stupid business to come down every morning to eat breakfast, to manage the household, to go for a walk, perhaps, or sit in the garden, and after completing the round of these daily futilities, to go to bed again and sleep, just for the recuperation that sleep gave, to enable her to do it all over again.

Millie, and nearly every other character in the book, is bored with her life and there is a deep-rooted discontent that she has never thought about until recently.  She wants excitement.  She wants to feel appreciated.  She wants to do something before she reaches the age when "nobody would care if she was pretty or not."

Mrs. Ames is in a similar position.  She only begins to appreciate her husband when his attention is diverted by another woman.  And even then, she doesn't want his attention because she loves him, she just wants it because she doesn't want someone else to have it.  Mrs. Ames touched me in much the same way Mildred Lathbury did in Excellent Women.  She is older than her husband by at least a decade, not very attractive and kind of dumpy.  But she puts herself out there- really makes a huge effort to gain his attention and to capture his interest again.  And I think her experience of that- realizing that she no longer attracts her husband and that someone else (a young, pretty and charming someone else) does- is one that many women can sympathize with.  She is so vulnerable through much of this book, trying to find her youth again and trying to share that experience with her husband.


The momentary bitterness in her mind had quite died down again:  there was nothing left but a vague, dull ache of flatness and disappointment.  He had noticed nothing of all that had caused her such tremulous and secret joy.  He had looked on her smoothed and softened face, and seen no difference there, on her brown unfaded hair and found it unaltered.

I just wanted to wrap her in a big hug at this point and tell her that her husband was an idiot.

There is much more to this story than I've detailed above.  For example, I did not share an example of Benson's fantastically satirical sense of humor and how well he portrays village life.  But to me, the book succeeds mainly because of these two women- Mrs. Evans and Mrs. Ames- and the universal experience of growing older.  I have some minor quibbles with the book, yes- there were some long passages of inner turmoil and thought that seemed very repetitive.  But overall, I thought this was an excellent read on about a subject that is often either ignored or treated too lightly.  There are many "rom-com" type books out there about a woman reaching middle-age, being left by her husband, and then trying to pick up the threads and lead a fabulous lifestyle.  And maybe those have their place, too.  But Mrs. Ames is honest and much more relate-able (I think, anyway, not being that age myself) and tempers the humor with true insight and empathy for its characters.  I thoroughly enjoyed the read and highly recommend it.

Note:  I received this book for free to review.
Musings by Aarti at 12:31 PM