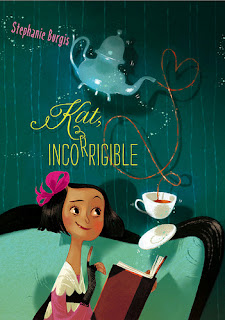 Kat, Incorrigible is the first book in a projected trilogy (because it's apparently impossible to write fantasy in less than three books) about a 12-year-old girl in 1803 England who realizes she has magical powers.

This book obviously appeals to me on many levels, being set in my favorite historical period, having an author with a professed love for Jane Austen and Georgette Heyer, and being a young adult fantasy.  And it delivered on a lot of fronts.

Kat is the youngest of three sisters.  Elissa is an angelic 19-year-old who has come to terms with the fact that she will have to marry an old ogre for money (and is quite enjoying the martyrdom that comes with that role).  Angeline is 17 and is practicing witch magic to find her own wealthy heir so that she can save Elissa from a terrible fate.  Unfortunately, she doesn't always understand the consequences of her spells.  So it's up to Kat the pre-teen to lead everyone on a hilarious and entertaining romp through the Yorkshire wilds and a country house party, making sure that everything can end happily ever after.

This book is a lot of fun.  Kat is a fabulously witty 12-year-old with a lot of courage, a lot of wit, and a lot of heart.  I like to pretend that I was that intelligently snarky when I was a tween, but alas, I probably was not.  She sticks up for her sisters, sticks up for her dead mother that scandalized polite society and stands firm on her ethical decisions.  She's the sort of heroine you really can cheer for and the sort of preteen I think many mothers would be thrilled to have for a daughter.  (No woe is me, no one understands my troubles, I hate everyone melodrama here.)  In my opinion, the other characters in this book pale beside her.  That's not because they aren't fully developed.  Angeline in particular is fleshed out pretty well and some of the smaller characters show great promise.  But none of them is ever in danger of stealing Kat's limelight.

In a way, this is unfortunate.  We get no real detail on Kat's father (always referred to as "Poor Papa") and all we know about her brother is that he ran the family into a great deal of debt and is now not allowed to leave the house.  I assume they come into play more in the next two books of the series, but in that case, I think it would have been better to leave Brother Charles out of this book completely and introduce him later.  The small allusions to him were odd and frustratingly didn't lead anywhere.

While I think Kat is probably a little too modern in her sensibilities and outlook on life for the Regency era, I frankly didn't care because I had such a blast with her.  And really, this book is aimed at girls aged 10-15.  I doubt many of them care about historical accuracy when reading a book like this.  Generally, that only begins when you have a 40-book-deep collection of Georgette Heyer on your shelves ;-)

But this book really isn't only about fun.  There are some deeper themes that come up.  For example, Kat is the youngest in her family by five years.  (Five big years, when you consider the age difference from 17 to 12.)  She often feels left out of her older sisters' conversations and perhaps that contributes to how plucky she is.  She also deals with the usual issues of being always treated like she's a baby and having all sorts of awkward moments that she must recover from.  But probably the most touching theme in the book is Kat's relationship with her mother- or lack thereof.  Kat's mother passed away very soon after giving birth to Kat.  While all her other siblings have vivid memories of at least a few years with their mother, Kat has none.  In many ways, she pursues her calling as a magician because she feels it brings her closer to her mother.  And she must deal with the hurtful casual comments her sisters make about how artifacts and memorabilia left behind by their mother cannot mean the same thing to her as it does to them, because Kat never knew her.

Those are some big themes for a small book, and I barely even touched on the magic aspect.  Really just a fun read with a lot of heart and a bright, sparkling main character.  I'm looking forward to the next two installments (which unfortunately only come out one each year).

Note:  In the UK, this book is called A Most Improper Magick, which is a title I like better but perhaps doesn't appeal quite so much to the middle grade crowd?


Note 2:  This review is based on an advance reader's copy.  I received this book for free to review.
Musings by Aarti at 8:43 AM