Musings: The Door in the Forest 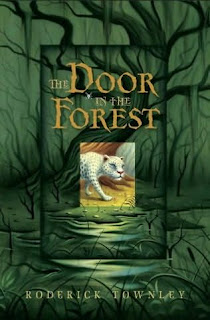 The Door in the Forest, by Roderick Townley, is a young adult fantasy that takes place somewhere in Europe shortly after the first world war.  Daniel is a tall, lanky boy in his early teens who physically cannot tell a lie.  He lives with his younger brother and his parents in a very small, rural town.  But strangers from town are coming through, including a fascinating girl named Emily who barely speaks.  She moves in with her grandmother, Bridey Byrdsong, a local witch.  And then the soldiers come, creating havoc and stealing a map (is it a map?) from Emily.  The villagers start getting angry, but one soldier in particular is greatly interested by the island in the forest by the village.  How do you get to it?  And what happens to you when you get there?

I've heard a lot about Roderick Townley's book The Great Good Thing, about a character in a fairy tale who decides to take her story into her own hands.  I've been wanting to read the author for a long time because he is well-regarded for his young adult fantasy.  But this book wasn't quite what I expected.

First of all, it was very dark.  Death and war.  Political prisoners and creepy soldiers.  Loss and all the rest.  The kids don't have much fun at all, and no one has much of a sense of humor.  This is often the case in fantasy novels, but with a whimsical title like The Door in the Forest and a character who reads the future in her soap bubbles, one would expect just a little bit of humor.  And there's very little.

I also didn't fall in love with any of the characters.  Daniel was kind and good and honest, and I liked him, but he was so serious that it was hard to imagine him as being just fourteen.  The same went for Emily.  The two just seemed so weighted down with their cares and worries that it was easy to respect them, but I couldn't warm to them.  Not that they cared, I'm sure, careworn as they were with the soldiers eating all their food and asking uncomfortable questions.  Emily and Daniel just seemed so much older than they were that when they actually did act like kids, it was jolting and hard to believe.

With characters so weighed down, it's probably no surprise that this book tackles some pretty heavy themes.  There are allusions to rebellion against a government that people do not agree with (hello contemporary Arab world!).  There's loss and the difficulties of dealing with loss.  Bravery and imagination and family and friends.  Townley does well in treating these themes seriously, but I think he treats them too seriously.  I'd prefer some lightheartedness and fun.