Musings: Mistress of the Elgin Marbles 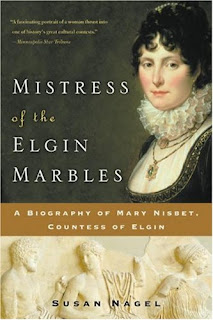 Mistress of the Elgin Marbles:  A Biography of Mary Nisbet, Countess of Elgin is one of the many books I've purchased over the years based solely on the criteria that it is non-fiction about the Georgian and Regency eras in Great Britain.

Looking at the portrait on the cover here, I thought Mary was an elegant, proper and snobbish member of the British upper crust (the very highest crust, really, as she was the greatest heiress in the country).  But I suppose most portraits make the sitters look like that, and it always makes me think that they are probably very misleading.

This book is about Mary Nisbet, who probably was elegant and proper and snobbish, but was also much more.  She was witty and charismatic and loved to play practical jokes on people with her father.  She traveled all over Europe and parts of Asia, making a positive impression on everyone she met, becoming the first woman to ever see many "men only" sights in Turkey and visit the Topkapi Palace.  She also pioneered the use of the smallpox vaccine, paying for people to obtain it out of her own pocket.  She and her husband, Lord Elgin, were political prisoners of Napoleon, but Mary somehow got onto good terms with that wily minister, Talleyrand.  Her marriage soon fell apart and her husband, seeking her immense fortune to help cover his enormous debts, sued for a very public and scandalous divorce.  He obtained the divorce, but Mary fought hard for control of her own money and miraculously managed to win it.  She went on to remarry and she and her second husband, Robert Ferguson, became champions of several social causes, including voting rights.  They were also big supporters of the arts. 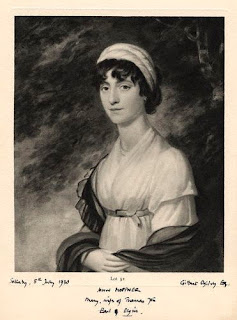 Whew,  some people do accomplish a whole lot in their time on earth, don't they?  Mary Nisbet is one of those people.  The author, Susan Nagel, had access to her personal letters and these helped create a very vivid portrait of a fascinating woman.  Mary Nisbet had serious social power, and she used it.  She was beautiful, intelligent, fun and very strong-willed and, it seems, nearly every man fell at her feet.  She lived an idyllic life until, very suddenly, it was no longer quite so idyllic, and even then she fought for what she wanted.  She is exactly the sort of woman I mean when I decry the modern writer's way of approaching historical fiction, acting as though women of the past were all dainty creatures who never tried to fight for what they deserved and always deferred to their husbands or fathers. Mary Nisbet wore the pants in every relationship she was in, I'll bet, and was not afraid to use her influence to change her world.

I think any book written on Mary Nisbet would be interesting just because Mary is ripe for biography.  That said, I do wish that Susan Nagel had gone into more detail on some things.  The book is only about 250 pages, but I think there could have been so much more in here.  For instance, we get a lot of detail on Mary's relatively short time as a prisoner in France, and then hardly any time on the whole divorce proceedings, which I think would have been more interesting.  How did Mary manage to keep her money, when hardly any other woman of the time would have been able to do so?  Nagel alludes briefly and frustratingly to "the Nisbet and Manners women clos[ing] ranks, waging the toughest divorce battle since Catherine of Aragon v. Henry VIII."  But readers get no real details on how the women did this and how their battle was won.  Nagel also skirts around the issue of whether Mary really did commit adultery or not.  The author also implies that Lord Elgin wanted a divorce not because Mary had been unfaithful, but because she was terrified of having more children and so refused to sleep with him.  She and her second husband had no children, either, so I wonder if she also refused to sleep with Ferguson, even though Nagel claims they had an "amorous" marriage (how does she know?!).  There were many details about which I would have liked to know more.  Though granted, I find Mary's story so enthralling, I would like to know much more about everything.

Mary Nisbet is one of those women that history has unfortunately forgotten (probably done on purpose by her children to cover the scandal of her divorce).  More and more, I begin to think this very unjust because it gives people such a warped view of what happened in the past.  Yes, men ruled Europe and women had very little legal recourse, but there were still amazing, brilliant females who were stars in their time and made a real impact on their worlds but who get very little credit for it.

The Elgin Marbles (Elgin is pronounced with a hard g, like in egg.  I didn't know that!) are the subject of an international debate of whether they belong in England or in Greece.  But almost always, credit for the dismantling, transport and delivery of the marbles to England is given to Lord Elgin when it was in fact his wife who not only financed the endeavor but also convinced grizzled Navy commanders (in the midst of war, no less) to carry the statues back to England.  But that feat is just one example of Mary Nisbet's charm and can-do attitude in a lifetime full of such things. She lived through American independence, the French Revolution, the invention of the telegraph, railroads and a massive change in the class system.  She was a plucky, strong woman and while I wanted more from this biography, I was happy to get a glimpse into such an extraordinary life.
Musings by Aarti at 11:02 PM